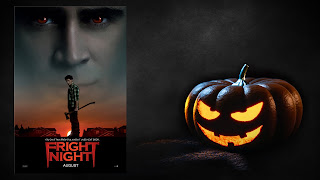 October can mean only one thing here at The DreamCage - it's time to count the days til Hallowe'en with David Ames' Hallow-vent Calendar of horror films! Day 19 is the 2011 version of Fright Night  ...


Read the review of the original Fright Night here.

If you couldn’t tell from last year’s list, vampire movies hold a special place in my heart. That is why the news of impending remakes of classic vampire movies worry me to no end. As with most movies, I try to go in with an open mind though and so when I heard that they were remaking an 80s vampire classic, I was apprehensive but excited. Today we talk about that movie: Craig Gillespie’s 2011 re-creation of Fright Night.

The movie opens with Charley Brewster, a teenager who lives with his single mom, in a suburb of Las Vegas. He has a beautiful girlfriend named Amy and a group of friends who fit the classic jock mold, although Charley doesn’t appear to be one of them. One day at school, Charley is approached by Ed, his ex-best friend who informs him that Adam, another person they both used to hang out with, is missing. After some searching, Ed informs Charley that the man who moved in next store to Charley and his mother (Jerry) is a vampire.

Charley doesn’t believe him even though Ed claims to have evidence. On the way home that night, Ed is chased by Jerry who threatens him before convincing Ed that the gift of vampirism was meant for him. When Ed is missing the next day, Charley becomes concerned, acting strange and standoffish to his mother and his girlfriend. He starts to spy on Jerry and when he sees his neighbor go into Jerry’s house, Charley can’t help but worry. In the middle of the night, Charley is awoken by a scream that appears to come from Jerry’s house, but after the police show up and nothing is found, they leave and Charley is left on his own.

He finds evidence on Ed’s computer that shows Jerry doesn’t leave a reflection and can’t be captured on film. Next he breaks into the house and in a closet finds a secret hallway with links to multiple rooms. Inside this room he finds his neighbor but when Jerry arrives, Charley must hide while Jerry feeds on the neighbor. Charley breaks her out and they flee but as soon as she touches sunlight she disintegrates.

Charley goes to Peter Vincent, a famous magician and Las Vegas celebrity for help but is turned away as Vincent believes he is lying. By this point, Jerry is on to Charley and sets fire to his house. In the ensuing chase, Charley, his mom Jane, and Amy all must fight against Ed and Jerry. When Jerry takes Amy, Charley returns to Peter Vincent who still refuses to help but gives him a blessed stake to help not only kill Jerry but return all of his victims to human. When Charley arrives back at home for the final confrontation, Peter arrives and decides to help.

I don’t want to give anymore away but I will say that I enjoyed the ending immensely. I don’t think that it was as good as the original but I still had so much fun with the whole film. It is shot beautifully and the music has elements of modern and classic horror that create a unique tone.

Performance wise, the side characters are all good. Toni Collette is a perfect single mom. She is sympathetic and funny but still strong willed and concerned for her son’s welfare. Imogen Poots is gorgeous and coy, just as Amy should be, but she transforms well when taken by Jerry. She handles both sides of the role wonderfully. Dave Franco shows up for a second as a bully but is funny as always. Lastly, in the smaller roles, Christopher Mintz-Plasse is a spot on Ed. He is funny and awkward and, later, completely unhinged. That was the role I was most worried about when the film was announced because the original was so iconic. I think Mintz-Plasse did the role justice.

Charley was played by the late Anton Yelchin who is so good at playing this type of role—shy but intelligent, funny and emotional. Watching him in this role as well as seeing his amazing performance in last year’s Thoroughbreds is heartbreaking because they showcase the well of talent that we will never get to see tapped.

The powerhouse performance of the film was easily Colin Farrell’s turn as the vampiric Jerry. Chris Sarandon was iconic and I wasn’t sure how Farrell would be in the role but damn…he was perfect. He was imposing and scary and oozed sexuality and violence. His approach was different from Sarandon’s but I enjoyed it just as much.

Overall, I think my love will still stay with the original ’85 Fright Night, but this remake is a worthy addition to the vampire genre. It is fun and sexy and, while there are a few pacing issues, I think that Gillespie and co. did the original justice.