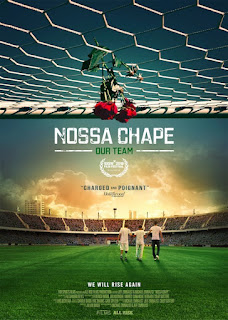 On recently at Raindance Film Festival, Tony Cross does a post-match analysis on the documentary Nossa Chape...

Nossa Chape is a documentary telling the story of a football team, Chapecoenese. This is one of those football documentaries that is about much more than football, but which has football all around it. If you don’t remember Chapecoenese were the team who were flying to Medellin in Colombia from Brazil when their plane crashed. Seventy one people were killed, which included 19 players and over 23 football club staff.

This almost destroyed the club and this film tells the story not only of what happened next, but also what had happened before. It tells the story of how Chapecoenese, a club from a small outlying Brazilian city had found themselves creating a footballing success: climbing the Brazilian Leagues, establishing themselves in the Brazilian top flight and competing in cross-border competitions with some of the biggest clubs in South American football.

The makers of this film – Jeff and Michael Zimbalist – ignore a straightforward chronological telling of the story, although we do resolutely move forward towards the present day.

And although this film has a football team at its centre it isn’t about football. Like Jaws isn’t about a shark. It’s about friendship and family. It’s about business and sport. It’s about re-building and survival. It’s about loss and about remembering. It’s about dreams and reality. It’s a wonderful film that won’t get a decent cinema release but should have a long and important life on Netflix.

We hear from a lot of people, but the focus seems to be on the three players who survived the crash, Ruschel, Follman and Neto, and the contrast between their experience and the wives of those who died. The interesting thing is how they are all used and treated by the club that – after an initial period of mourning – seems desperate to just get back to business as usual, even though it can never be business as usual.

Some of the people running the club come out of this looking cold-hearted and possibly a little devious but Ruschel, Follman and Neto come through it with a dignity that I’m not sure I’d be able to maintain in those circumstances. They know – as the survivors – they are going to be used by the club to represent all those that have been lost. Indeed, there’s a whole section around the launch of a new kit that shows how much they are used. It’s the only time it looks like one of the players, Neto, is going to lose his temper at how they are being treated.

We also get the stories of some of the widows and how they are dealt with by the club and what seems to come out of the film most strongly through the stories of the widows and the survivors is how much of a close-knit team the 2016 Chapecoenese squad was. There’s mobile phone footage of them together both in dressing rooms and at home. There’s music. There are jokes. A lot of it feels familiar. We used to seeing how footballers are together. And in the aftermath of the crash with a new manager in place it is that loss of spirit that seems to cause the most pain.

The story of Nenén* – who was in that 2016 team but didn’t board the plane – seems to be the key to spelling all of that out. His relationship with the new manager is a painful one.

This is an emotional film, but it isn’t a manipulative emotion fest. The most moving moments seem to come naturally not artificially, which makes it all the stronger. It’s a film that is worth watching because it is about (mostly) good people trying to deal with terrible circumstances. It’s about the value of life and living it. As one of the surviving players almost says in a team talk to the new squad ‘get out there and enjoy what you’re doing because you never know when it is going to end.”

*I may have got that name wrong. Sorry. I still haven’t got the hang of making notes in cinemas when reviewing films. I must rely on the internet and my memory. That’s my excuse and I’m sticking to it.