Film - May the Devil Take You 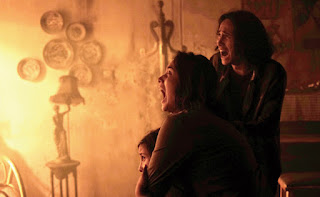 Screening at London Film Festival next week, Ren Zelen makes a deal with the devil and watches May The Devil Take You...

Indonesia's Timo Tjahjanto first appeared on the horror scene as one half of duo The Mo Brothers before co-directing the Safe Haven segment of anthology V/H/S 2 with The Raid's Gareth Evans. His new feature May the Devil Take You is screening at the BFI London Film Festival and doesn’t pull any punches when it comes to scares.

The film begins with workaday businessman Lesmana (Ray Sahetapy) inviting a creepy, raven-haired woman (Ruth Marini) into his home. When they descend to the basement of the house and she proceeds to light candles, cast runes, recite mystical chants, swallow large locks of black hair and frolic with the dismembered head of a black goat, it becomes pretty clear that she’s preparing the space for a ceremony involving black magic.

Lesmana is about to sell his soul to the devil for the promise of wealth and success, and immediately the deed is done, the Devil seals the deal by making a down payment and sending a storm of money swirling into the room.

Lesmana receives the success he has long wished for, but eventually the time comes to uphold his end of the bargain, but has he fulfilled his part as promised?

Years later, Lesmana is on his deathbed, suffering from a hideous illness which leaves him covered in sores and boils and prone to vomiting black blood. His children are assembled - his daughter Alfie (Chelsea Islan) from his first marriage and her step-sisters Maya (Pevita Pearce) and little Nara (Hadijah Shahab) and step-brother Ruben (Samo Rafael), the children from his second marriage to Laksmi (Karina Suwandhi) a beautiful but greedy actress.

Although Alfie has been estranged from her father for ten years, following the mysterious suicide of her mother and his subsequent remarriage, she relents and answers her father’s deathbed summons. There she discovers that she is the sole inheritor of his summer villa, a place no-one has visited for years. 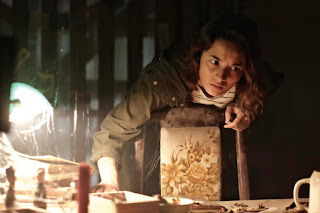 Second wife Laksmi and her children are horrified to find that Lesmana’s business has been failing for some time and is on the point of bankruptcy, so they turn up at the dilapidated summer villa hoping to scavenge anything of value before Alfie arrives.

They are too late, as she is already there, and overhears their intentions. A tense evening ensues while the group vainly attempt to retain a veneer of civility towards each other. They’re bound together by tragic circumstances and their reasons for resenting each other are understandable. It proves to be the family reunion from hell, in this case, rather too literally.

As the inmates begin to explore the villa, they blithely ignore warnings pasted on the door of the basement because yes, this is the very house where Lesmana had made his original demonic bargain. Once the gateway is open the Devil and his minions can come calling to collect their due. Alfie and her step-family are drawn into the evil bargain her father made all those years before.

Step-mom Laksmi’s temper and avarice are the cause of her being the first to fall prey to the unpleasant attentions of the resident demons, (she’s a nasty piece of work in a pretty package – not so pretty after). Now the fun really starts as a roller-coaster of horrors is unleashed. The shocks come thick and fast and no-one in the family remains untouched.

As horrors go, Timo Tjahjanto May The Devil Take You is pretty relentless. You can guess where it’s going, but the derivative aspects aren’t to the film’s detriment, they simply serve as a springboard for Tjahjanto to unleash his own brand of chaos. The movie doesn’t waste much time getting to the action, and the resulting nightmare for the dysfunctional family proves to be more eventful than the average supernatural chiller.

Accompanied by an intense soundtrack, May the Devil Take You offers an array of Raimi-esque shocks - Tjahjanto is clearly a fan of The Evil Dead, making his demonic entities similarly gleeful and vicious. There are likewise monster-faced distorted demons, blood and gore aplenty, and a near exhausting sense of creeping discomfort. Just when you think it’s over, another fright is thrown at you. It makes for a great popcorn horror, if you don’t mind losing your popcorn whenever you jump in your seat.

May the Devil Take You at times also reminded me of the horror onslaught of Raimi’s Drag Me To Hell except, unlike that movie, it doesn’t really have its tongue in its cheek. However, it should firmly establish Indonesian Timo Tjahjanto as one of the most entertaining horror directors currently working in Asian cinema.

May the Devil Take You screens at London Film Festival on Wednesday 17th and Thursday 18th October. Book tickets here.