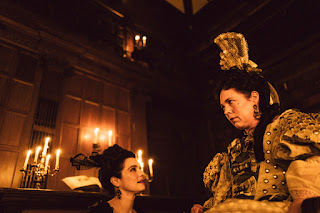 Ren Zelen held court as she watched The Favourite at London Film Festival...

Taking his lead from the Restoration comedies of the period, Yorgos Lanthimos brings a wicked vein of vulgar humour to his latest film The Favourite.

Set in the 18th Century court of Queen Anne, Lanthimos steps back from his trademark robotic-like dialogue and goes full throttle with an original script by Deborah Davis and Tony McNamara which is wordy, witty, acerbic and lewd. The film is loosely based on the true story of Sarah, Duchess of Marlborough, and her rivalry with Abigail, Baroness Masham, her cousin, for the favour and munificence of the monarch Anne.

Sarah Churchill, the Duchess of Marlborough, (Rachel Weisz) is the childhood friend and confidante of Queen Anne (Olivia Colman). Sarah runs the household, takes care of the domestic finances and often serves as her queen’s proxy in Parliament. She is a formidable force, astute and efficient – she runs a tight ship.

Just as well, as Queen Anne has been shielded and infantilised throughout her life and feels at a loss regarding the intrigues of politics or the practical matters of household management. Of course, her childishness also leaves her open to emotional manipulation.

Lady Sarah plays upon this weakness by ensuring that the Queen remains emotionally and practically dependent on her. She does this by her efficiency but also by other means, including intimacy, cajoling, intimidation, playfulness and when the occasion demands, sexual gratification.

Sarah intends to have the Queen’s support in her goal of the raising of taxes for an ongoing French war that will glorify her own soldier husband Marlborough (Mark Gatiss). In this she has the support of the Prime-minister Godolphin (James Smith).

However, the leader of the opposition, Robert Harley (Nicholas Hoult) fears that another increase in taxes may lead to riots amongst the people and is keen to dissuade Queen Anne from taking this line of action. Also, there is no love lost between Harley and Lady Sarah, who finds fun in teasing him and insulting his narcissism and foppish appearance.

Then, a cousin of Sarah’s, fallen on hard times, arrives at Anne’s court hoping to gain some form of employment. This is Abigail Hill (Emma Stone) a gentlewoman who is now degraded to the level of a servant. 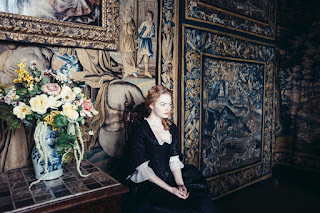 However, when Abigail’s knowledge of medicinal herbs proves to help relieve the queen’s gout, Sarah elevates her to the position of her personal maid. What she doesn’t as yet see in the wide-eyed innocence of her young cousin, is the fact that some hard knocks have instilled in Abigail an eye for opportunity, and that the girl is herself hoping to gain Queen Anne’s attention and find a way to regain her previous station in life.

Sadly, the truth is, that there has been genuine tragedy in the life of Queen Anne. This means that her lethargy towards the duties of monarchy and her mercurial outbursts have a basis in grief and heartbreak. Portraying the vagaries of Anne’s character, which veer between comedic, playful, saucy, maudlin, self-pitying and acquiescent, would be a challenge for any actor, but Olivia Colman manages to convey all of these shades masterfully and with sympathy.

It is also a demanding physical performance – Colman teeters and hobbles around after an attack of gout, and visibly sags in the latter stages after the Queen has apparently suffered a debilitating stroke. (Colman has already picked up an acting prize at the Venice Film Festival).

Weisz, Colman and Stone relish the liveliness and cynicism of the script. They all give arresting and engaging performances. Weisz as the caustic but canny Lady Sarah has some of the most amusing lines, asking dryly, “Friends of yours?” when Abigail first arrives surrounded by buzzing flies and covered in stinking mud, having fallen from her carriage.

Apart from conveying the intelligence and cunning of her character, Weisz also manages to indicate a complicated set of contradictory feelings for her old friend Anne – manipulation and exasperation certainly, but underneath her occasional harshness, a genuine concern. Emma Stone as Abigail rises to the challenge and manages a period character with an English accent convincingly, sparring adeptly with her accomplished co-stars.

The three women at the centre of the film also succeed in subverting some of the usual gender stereotypes. Lady Sarah and Abigail find sport in shooting guns and horse-riding. They enjoy verbal skirmishes and plotting against impediments, rivals and each other.

Despite its humour, Greek auteur Yorgos Lanthimos also succeeds in imbuing The Favourite with some of the absurdism and darkness of his previous films. Seemingly light-hearted and waggish at first, a more sombre and threatening atmosphere slowly begins to creep into the proceedings.

Lanthimos begins to undermine the impressions we have at first received of the major characters, and the amusement we initially felt at their scheming gives way to something increasingly unsettling and macabre. The story clearly intends to eschew historical fidelity, preferring to create a scenario that is entertaining and thought-provoking, but also ultimately rather troubling.

However, the film looks opuent - cinematographer Robbie Ryan makes the court seem alternately claustrophobic or immense and lonely with his use of wide-angle distortions and off-kilter perspectives. The camera moves from the lower floors with its narrow stone corridors and vast kitchens, up dark, carved wooden staircases, lengthy cloisters, large drawing rooms and plush private chambers. (The actual location being Hatfield House, a Jacobean estate in Hertfordshire).

Praise must go to Production designer Fiona Crombie who has bedecked the rooms so that the use of natural light - sun streaming in through windows, or candlelight flickering - makes the brocades and fine tapestries glisten and the crystal and gilt twinkle.

The Favourite may prove to be Lanthimos’s most accessible, consistent and crowd-pleasing film so far, but what makes it work so well are its women, played by actresses which bring alive the wit of the script and the machinations between their characters. They have succeeded in imbuing The Favourite with a compassion and warmth that has previously eluded Lanthimos’s work.