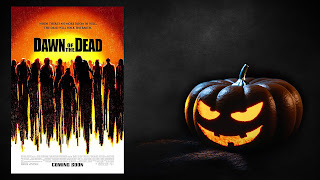 October can mean only one thing here at The DreamCage - it's time to count the days til Hallowe'en with David Ames' Hallow-vent Calendar of horror films! Day 23 is Zack Snyder's remake of Dawn of the Dead...


Read the review of the original Dawn of the Dead here.

The zombie genre has exploded in recent years with the success of The Walking Dead. With this explosion there has been an influx of different zombie types. There are the slow, methodically walking zombies that we see in The Walking Dead, shambling, rotting corpses akin to those in any George Romero film. Also, we see the fast, full-speed zombies, hunger and rage driven beings who can dead sprint while even on fire, seen in films like 28 Days Later and World War Z. Today we are talking about a mix of the two when we look at Zack Synder’s 2004 remake of Dawn of the Dead.

Ana is a nurse finally heading home after a long shift. She is greeted first by Vivian, a neighbor girl, before getting home to her husband Luis. While the two engage in some marital bliss, they miss an important announcement from the news. The next morning, Luis is awakened when he hears Vivian in the hall outside his bedroom. She is covered in blood and when Luis goes to investigate, she attacks and bites through his neck. Ana tries to save him but cannot and when she is distracted, his corpse reanimates and attacks her. As she escapes outside, the beautiful suburban neighborhood from before is in utter chaos. Multiple fires are burning as the neighbors chase and try to destroy one another.

Ana escapes her neighborhood by car but, after almost being robbed of her vehicle by a police officer, is run off the road. When she awakens, she meets up with Police Sergeant Kenneth Hall, a salesman named Michael and a couple, Andre and his pregnant wife Luda. The group treks to the nearest place they can find, a shutdown mall, and secures the building in order to survive the zombie outbreak. The three guards of the mall, CJ, Bart, and Terry reluctantly join the group and the unit fully locks down the mall. During an inspection of the premises, they notice another survivor named Andy who is stranded in his gunstore across the street, but seems to be doing just fine.

When another truck load of survivors appears, the group must take into account new personalities which include Frank and Nichole, his daughter, Steve, Tucker, Norma, Monica, and Glen. As the days pass, Kenneth and Andy form a bond by writing messages back and forth to each other and looking through binoculars to read each. Ana and Michael as well as Nichole and Terry form relationships and everything is looking up until Bart is killed trying to fix the power. As all of this is happening, it is revealed that Luda was bitten slightly and is turning. Andre has kept her tied up and after she gives birth, she is killed. Sadly, the baby is also a zombie upon birth and must be killed as well but Andre snaps and exchanges gunfire with Norma. Both are mortally wounded and everything begins to fall apart.

The group formulates a plan to outfit two of the busses in the garage into armored tank-like vehicles, pick up Andy, and make a move for the marina in hopes of sailing to an island where the zombies haven’t encroached. I don’t want to give away much else as the climax of the film is pretty great and deserves your full attention.

As far as gore is concerned, the film does a lot but in subtle ways. There isn’t a lot of gushing and oozing blood but there is the occasional geyser. Where the true genius of the gore lies is in the wounds which are grotesque and unnerving, especially when they are on the face of the young Vivian in the beginning. In fact, the entire opening sequence is pretty magical. We are treated to a lovely suburban neighborhood, only to wake the next morning to see everything in a panic and chaos reigning supreme. It perfectly sets the stage for a zombie film.

The cast is very large and so I don’t want to spend forever talking about them but I will say that Ving Rhames is a great Kenneth. He carries the power of the black police officer from the first film but is much more understated in his delivery, in a way only Rhames can really pull off. He is strong and intimidating but not without care. Mekhi Phifer is a perfect Andre and when he turns, Phifer’s true acting chops come out. Jake Weber is soft spoken and logical, providing not only leadership but also a moral compass for the entire group. His demeanor is what helps to keep everyone calm, even in the face of utter destruction. Lastly, Sarah Polley really delivers and is the strongest performance in the film. She is beautiful but not afraid to kick ass when need be. She plays the sensitive type well but is also not afraid to get her hands dirty in order to survive—truly she is far from the damsel in distress.

Overall, while the classic is just that, I think I may prefer the Snyder version. The use of Johnny Cash’s “When the Man Comes Around” is perfection and the addition of the hilarious Richard Cheese version of “Down with the Sickness” is a great way to add levity to the potentially disturbing images on screen. The classic has its place and is in many ways a better film, but the remake is more fun to watch in my opinion. There is a great mix of Romero and Modern zombies and they provide a diversity which makes the shambling undead far more interesting to watch.