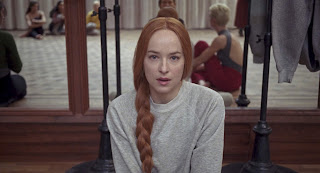 Following his examination of first love in last year’s hit, Call Me by Your Name, Luca Guadagnino has bravely attempted a re-imagining of the classic horror Suspiria, originally by his compatriot, Italian director Dario Argento.

While Argento’s film was a lurid dream of voluptuous excess, vivid colour and graphic violence, all to the wail of a thunderous soundtrack, Guadagnino's approach is far more muted in both palette and tone. He uses mostly grim, wintry hues and the restrained musical noodlings of Thom Yorke.

Guadagnino’s Suspiria is set in 1977 (the year the original was released) so is now a period piece. The opening title informs us that Guadagnino and screenwriter David Kajganich have rewritten the film as “Six acts and an epilogue, set in divided Berlin”. Lest we don’t remember this era, we hear of violent clashes and bombs on the streets while the radio and TV frequently deliver news reports about the Red Army Factions’s kidnapping of Hanns-Martin Schleyer and the hijacking of Lufthansa Flight 181.

Into this ‘divided Berlin’ arrives Susie Bannion (Dakota Johnson), a sheltered and naïve girl who grew up a rebel on a Mennonite farm in Ohio, and who dreamt of being a dancer with a prestigious dance troupe based in Germany.

During her audition, Susie is asked to improvise a routine without music. She jerks her body back and forth, aggressively throwing her limbs about to her own mental rhythm. Her unselfconscious, fearless style impresses Madame Blanc (Tilda Swinton), the austere director of the dance academy.

Susie turns up just as another student, Patricia (Chloë Grace Moretz) vanishes after delivering a disjointed confession to an elderly psychologist, Dr Jozef Klemperer (‘Lutz Ebersdorf’ - an uncredited Tilda Swinton in ‘old-man’ prosthetics). Patricia believes that the dance academy is run by a coven of witches who are hounding her to death.

Dr Klemperer, concerned by Patricia’s sudden disappearance and haunted by the memory of his own wife who went missing during the Second World War, begins to investigate the academy, thinking it may be housing a terrorist cell. Meanwhile, Susie Bannion gains the approval of the staff and in a meteoric rise, becomes the academy’s star pupil.

Whereas Argento’s 1977 film maintained its weirdness and unease and kept its sinister revelations until the end, Guadagnino shows his hand early on – revealing, via Patricia’s panicked declarations in the first minutes of the film, that the school is run by a witch’s coven - she even leaves a diary full of clues for Klemperer to unravel.

Then, very soon after, Guadagnino chooses to present us with arguably, the most disturbing scene of the film. When Patricia’s stand-in, Olga (Elena Fokina) stalks out of the studio in disgust, accusing Blanc and the staff of lies and hypocrisy, Susie offers to dance for the role of the protagonist in ‘Volk’, the group’s signature dance piece. 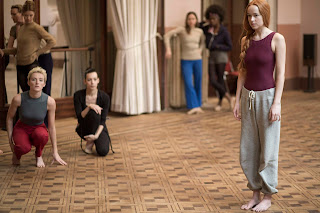 Teacher Miss Tanner insists that Susie dances the part solo rather than within the ensemble, asserting sarcastically that she wouldn’t want one of the surrounding dancers to get ‘a kick in the ribs’. With an affectionate touch from Blanc, Susie receives permission and proceeds to throw herself into the performance.

Tanner’s comment turns out to have been knowingly ironic because, following Blanc’s touch, in an unsettlingly graphic scene, we see that with each thrust, spin and kick, Susie is unwittingly and invisibly assaulting Olga. Trapped alone in the mirrored studio below, Olga’s body is being flung around the room like a rag doll, in correlation to Susie’s movements. Her limbs broken and dislocated, her ribs cracked and protruding, Olga is left crushed and crumpled, oozing blood and urine.

Guadagnino has assembled an intriguing array of foreign actresses to play the teachers at the academy, including 1970s Euro-stars like Fassbinder’s wife Ingrid Caven, German New Wave star Angela Winkler, Paul Verhoeven’s prior leading lady Renée Soutendijk and Sudanese supermodel Alek Wek. Unfortunately, they’re mostly underused apart from lending their exotic looks and accents to augment the sinister ambience of the ‘foreign other’.

Argento’s Suspiria was a schlocky piece of lurid Grand Guignol with a minimum of plot which ran its course in a snappy hour and thirty minutes. Its pleasures were all about style, not substance. It became a cult favourite with fans who enjoyed its garish, psychedelic shock value and its voluptuous voyeurism of violence perpetrated upon nubile female bodies. No-one seriously called it an art film.

Guadagnino’s Suspiria runs a comparatively lengthy two hours and thirty minutes and aspires to be cerebral, high-end horror. It's the kind of film you might expect when an arty 'intellectual' Italian film director 'reimagines' the work of a gaudy, schlocky Italian filmmaker - Suspiria becomes an art film about the dynamics between mysterious characters.

However, the narrative focus is not at all clear. We don’t really know why terrorist events, Klemperer survivor’s guilt and references to the schismatic conflict between Amish and Mennonites might have anything to do with a dance academy that’s run by a coven of witches. One can only speculate that somehow political and religious dissention and familial guilt run parallel to the schism that is occurring amongst the coven.

The occasions when Guadagnino tries to scare us are fairly rare. When they do happen they tend to involve shocking moments of sudden violence, or unsettling hallucinogenic dreams of nightmarish imagery — the body-horror of blood, entrails, worms, torture. These intermittent moments of vague subliminal fear or abrupt brutality serve to build up to the wild, orgiastic, and rather exaggerated denouement, when the final ‘twist’ doesn’t seem all that astonishing when embedded in what proves to be an extreme and outrageous context.

In the end, Guadagnino’s frights do turn rather luridly ‘Argento-esque’, but it seems that we are now expected to take them more seriously, even though the political subtext never satisfyingly ties in to the rest of movie. I suspect that this Suspiria is just trying to pack in too many ideas, even with its extended run-time. However, one still has to admire Guadagnino’s sense of visceral disgust and artistic vision, both of which enliven this rather cluttered ’homage’.