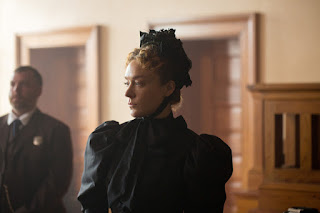 Lizzie Borden, tried and acquitted of murdering her father and stepmother in 1893, went into American folklore in the American skipping rhyme, ‘Lizzie Borden took an axe, gave her mother forty whacks. When she saw what she had done, she gave her father forty-one’.

In their feature film Lizzie, director Craig William Macneill (The Boy, 2015) and screenwriter Bryce Kass, speculate as to the reasons for the murders, but in their own examination of the case, they choose to take a distinctly feminist line.

At the outset of the film we see that the Bordens are one of the wealthiest and most respected families in their small Massachusetts town. However, businessman Andrew Borden (Jamey Sheridan) is a notorious penny-pincher and has so far even declined to set up electric lights in his home - “Father prefers it in the dark,” is Lizzie Borden’s (Chloë Sevigny) retort to a catty jibe from a society girl she meets in a theatre powder room.

Indeed, the lack of light lends to the idea of an atmosphere of secrecy and a darkness of soul that pervades the Borden House, where at night there are only faint, candlelit reflections and where there is silence apart from the creaking of floorboards.

The unmarried Lizzie constantly tests her father’s patience, sparring with him verbally and questioning his authority. She defies him by insisting that she can attend the theatre unescorted. Unfortunately, during the performance, Lizzie’s emotional response induces one of her fainting spells, which results in threats from her parents to send her away to be ‘looked after’ elsewhere. It seems that fainting was excuse enough to consider an otherwise smart and healthy woman unfit to make her own decisions.

Unsurprisingly, the fiercely intelligent Lizzie feels thwarted and suffocated by her miserly, authoritarian father, her indifferent stepmother (Fiona Shaw) and longsuffering older sister Emma, (Kim Dickens) who do nothing to support her need for even the smallest degree of autonomy and challenge her every action. 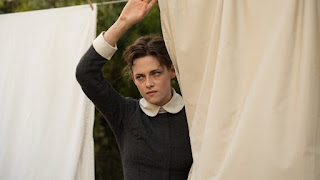 A new housemaid comes to the Borden house - a poor Irish girl named Bridget Sullivan (Kristen Stewart) although the household immediately renames her “Maggie”- a generic name given to all Irish servants. By contrast, Lizzie insists on calling her by her real name.

Bridget is reticent and barely literate, and, thirsty for companionship, Lizzie starts teaching her to read. Bridget is a slight but pretty girl and diligent in her work. It isn’t long before she is noticed by Andrew Borden who suggests giving her a small raise but then proposes that she should keep her door open at night ‘to let the air circulate’.

Inevitably, he goes up to her room at night where he commands her to “be a sweet girl” and proceeds to rape her. Distraught as she is, Bridget is dependent on his good references if she is ever to be allowed to find another position, so she is a prisoner to his unwanted advances.

Andrew Borden continues with his sexual assaults on Bridget and verbally abuses the rebellious Lizzie, but it is revealed that he has been receiving anonymous notes that come to the house threatening that ‘his sins will find him out’.

Borden shows the poison-pen notes to his late wife’s ne’er-do-well brother John Morse (Denis O’Hare). Confessing himself unsettled by the threats he makes John the executor of his will, putting him in charge of the finances of the women in his house, of Lizzie and her also-unmarried sister Emma.

Lizzie overhears the plan and is angry and indignant, because she knows her uncle to be a greedy and unscrupulous felon. She takes her concerns to the family lawyer but is rebuffed when she suggests that Morse is plotting to get control of Mr. Borden's business interests and estate, cutting out Lizzie and her sister.

In his 1984 novel ’Lizzie’, Ed McBain speculated that Lizzie and Bridget were lovers, and Macneill’s film takes on that theory and expands it into a tragic romance, (although there is actually little evidence that the real Lizzie was a lesbian or ever had an affair with her family servant). 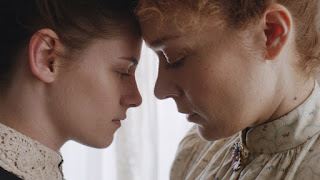 Kass’s dialogue creates Lizzie as a character with steely determination, a quick mind and acerbic wit. It’s a marvellous role for the talented, underrated Chloë Sevigny. Stewart has the smaller part to play but she subtly makes the most of it. (The actress has been coming into her own for some time and getting better with every performance).

However, the thwarted love affair is only one of Lizzie’s provocations - she must contend with her father’s cruelty, his sexual attacks upon Bridget, shady financial dealings and the indifference of the world and her other family members. Her ‘forbidden love’ becomes just one more vestige of her independence that she becomes desperate to maintain.

The film is quiet, elegant and attentive to period detail. Noah Greenberg's cinematography focuses on the empty spaces in the house - the misty, grey light falling through blank windows, the dark wooden furniture and creaking floors. The house is grandly gloomy, darkly claustrophobic, solid but comfortless.

We do not see the actual murders themselves until the end, after we’ve seen the testimonies at the trial. On an airless summer’s day, we see how the killings come to pass - premeditated, shocking and brutally cathartic - even though the jury in court never found the real Lizzie to be guilty of the crime.