Film - Mark Felt: The Man Who Brought Down the White House 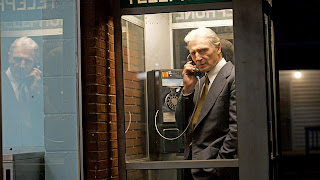 The Watergate scandal is a fascinating subject that, in the last twenty years of me studying, I feel I haven’t even scratched the surface of. My first and main fascination with the scandal was from a journalistic point of view. I loved the idea that journalists like Bob Woodward and Carl Bernstein had the audacity to stand up to the powerful and the corrupt and chase their story, perfectly dramatized in All the President’s Men. As time went on I became obsessed with leaks, Anonymous and Chelsea Manning along with Wikileaks gave me a sense of anarchy and are all truly wonderful stories to follow but, with the leak by Edward Snowden, I found a whistle-blower that struck me as a man of integrity, a man of principle that had no choice but to tell the world of what he had discovered, which led me back to Daniel Ellsberg and, in turn, the era of Watergate and Deep Throat himself, Mark Felt. Surprisingly I knew very little about the actions of Felt, I knew the information he shared with Woodward but nothing beyond that and in Mark Felt: The Man Who Brought Down the White House I got an entertaining history lesson.

Yes, lots of leaking information is included in the film and that is a very good reason to watch, but underneath the surface was the life of Mark Felt himself, the internal politics within a changing Federal Bureau of Investigation post-Hoover, and a lovely layer of anxiety and distrust felt by just about everyone. If it wasn’t the current incumbent of The White House and the awful state of the world in 2018 I would honestly believe that politics had never been as murky as it was during the reign of Nixon, we live in a world now where Nixon doesn’t look that bad which is astonishing. The main man, Felt, is played by Liam Neeson and it is a powerhouse performance up there with Michael Collins in my affection, but he is backed up with an ensemble that are all at the top of their game. Bruce Greenwood, Eddie Marsan, Noah Wyle, and Michael C. Hall are all incredible in their roles but for me the only others that get anywhere near Neeson’s sheer class are Tom Sizemore as Bill Sullivan chewing scenery with every line spat, and Marton Csokas as L. Patrick Gray. Gray is such a difficult character to portray. An ex-military man who seemed to have the perfect moral compass and be an ideal replacement for the scourge of Washington J. Edgar Hoover, Gray had the desk of Director of the F.B.I for little over a year and was finally forced out by the Senate after admitting his role in the Watergate cover up. I am not sure how much research Csokas could have done with Gray not speaking about his actions until just before his death thirty odd years later but whenever I have read about Gray everything I imagined from the page was encapsulated by Csokas.

The film has real tension as well as the ability to entertain whilst educating and rarely does such a cast of luminaries perform so well together and yet somehow manage go under the radar. I know political films aren’t all the rage at the moment but surely a story as intriguing as Mark Felt’s demands an audience does it not? Its not that old of a story, he didn’t even admit to being Deep Throat until 2005. If you have any interest in whistleblowing, then this is a great film for you. Felt must be up there with Snowden and Ellsberg for impact and legacy from his “treachery” and even if leaking is not your bag, the ensemble cast, Neeson, and especially Csokas are well worth a watch.