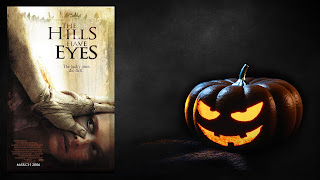 October can mean only one thing here at The DreamCage - it's time to count the days til Hallowe'en with David Ames' Hallow-vent Calendar of horror films! Day 26 is the 2006 remake of The Hills Have Eyes  ...


Read the review of the original The Hills Have Eyes here.

Much like yesterday’s review, today is yet another remake of a cult classic. This October was the first time that I saw the original but I remember vividly when I first saw the remake. It was creepy and disturbing and had scenes that were downright unnerving. It has been roughly five years since I watched that remake but this year’s Hallow-Vent Calendar was the perfect opportunity to revisit this film and rediscover, after having seen the source material, how good the new version actually is. Today we are talking about Alexandre Aja’s 2006 film The Hills Have Eyes.

The movie begins when a group of scientists investigating the New Mexico desert are killed by a mysterious man who is deformed beyond recognition. Next we are introduced to a large family who is taking a trip cross country, from Cleveland to San Diego, for the matriarch and patriarch’s 25th anniversary. The group is composed of Bob and Ethel (the father and mother), their three children Brenda, Bobby, and Lynn, and Lynn’s husband Doug. Also on the journey is Catherine, Lynn and Doug’s infant daughter, and the family’s two German Shepherds named Beauty and Beast. When they stop to refuel, Jeb, an old gas station attendant, informs the family about a shortcut through the back hills which will shave a considerable amount of time off the trip.

When the family embarks on this short cut, their tires are popped by a hidden spike strip. Bob and Doug go to get help and Beauty escapes into the nearby hills. Bobby finds her later but she is disembowelled and, shocked, falls and knocks himself unconscious. Bob and Doug both find strange and unsettling things on their search trips including a crater filled with abandoned cars and a series of newspaper clips detailing disappearances in the hills. Bobby recovers and warns the family that they are not alone but no one pays any heed. The family is then awoken by Bob’s screams and the family rushes to him, only to find that he has been crucified.

In all this horror, two more mutated men break into the family trailer, brutally raping Brenda and forcing the lactating Lynn to allow them to drink from her breast. The two men then kill Ethel and Lynn, before fleeing with Catherine. The next day, Doug takes Beast and goes to find Catherine, discovering an abandoned Nuclear testing area before being knocked out and kidnapped by yet another mutant. I don’t want to give anymore away, but much like the Evil Dead remake, this film deserves to be seen and to have its ending enjoyed without ruin.

The performances in this film are all solid and so I am not going to talk about them at great length. The only two performers who I will discuss are Aaron Stanford, who played Doug, and Laura Oritz, who played Ruby (a mutant who actually helps Doug). Stanford is strong and powerful and fights like he has nothing left to lose. His performance carries a ton of weight and helps us to side with him. His transformation from button-upped husband to revenge-seeking, blood covered savage is shocking and fun in the best possible way. Oritz, who plays a small but integral role in the film, is also wonderful. We feel bad for her, despite what family she belongs to. She sells the innocence of a child in the same way that Frankenstein’s monster is sympathetic in the novel.

The effects were spot on and were more disturbing than most of the other aspects of the film. In preparing for the film, the production team decided to make all of the mutations accurate to what would have happened based on nuclear fallout around the world. By doing this, the mutants are far more unsettling as they seem incredibly realistic and believable. Also, the gore and viscera this film utilizes is exactly what the film needs. It isn’t over the top and it isn’t distracting. It is perfect for its purpose. Also, during the production, through the use of shot and stock choices as well as specific musical numbers, the film is able to reproduce a vibe that hearkens back to the 70s.

As remakes go, I think that this one is a solid attempt. While this film may lack the political overtones of the first film, it makes up for it with a much better executed story and kills and scenes that are far more disturbing. Overall, as blasphemous as this may be, I think I have to say that I enjoy the remake more than the original.