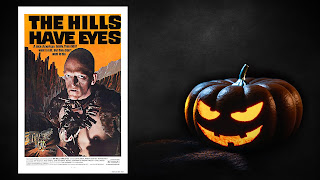 October can mean only one thing here at The DreamCage - it's time to count the days til Hallowe'en with David Ames' Hallow-vent Calendar of horror films! Day 12 is his look back at The Hills Have Eyes...


Horror is such a vast genre that it can be difficult at time to pin down your favorite subgenre or niche content matter in the overall category. Whether it is torture-porn or slashers or psychological, horror is as varying as any other genre, often combining multiple subgenres as a way to vary content matter. Today’s movie would fall into the psychological genre but it also contains elements of the survival and revenge horror categories which make it equally interesting. I am speaking of Wes Craven’s 1977 cult classic The Hills Have Eyes.

This film begins when Ruby, a dirty and wild child approaches an old man, Fred, in hopes of either trading for food or gaining a ride out of the desert where they currently are. Fred owns the local fuel stop and, from what we can gather based on the dialogue, is involved with Ruby’s family in so much as he has helped them in the past and covered their tracks while they have committed crimes. When a family of upper class people show up looking to go into the backcountry to search for silver, Fred warns them to avoid the area as it is boring and dangerous and the mines have gone dry. Bob, the father, ignores Fred, deciding he is just crazy, and continues their trip into the desert. We are led to believe that Ruby’s family will kill the family and do far worse.

Throughout the course of the next scene, Bob loses control of the car and the camper and wrecks, stranding the family, made up of Bob, his wife Ethel, his daughter Lynne and her husband Doug, their baby girl Katy, and Bob’s teenage children Bobby and Brenda. While Bob and Doug set off in different directions to look for help, the rest of the family and their two German shepherds, Beauty and The Beast, stay behind and wait. Bob encounters Fred trying to kill himself and rescues him, only to be told the truth about the wild family in the hills. Before he can finish, one of the men kills Fred and takes Bob hostage.

Back at the car, Beauty runs off into the nearby hills and when Bobby finds her disembodied corpse, he realizes that something is wrong. The Beast also runs off and goes missing. Bobby doesn’t tell the family what he finds in hopes of not upsetting them too much, but beauty’s death becomes the first horrors they will experience.

Over the next few hours, numerous events take place, including a crucifixion, a rape, two murders, and eventually the kidnapping of the baby, Katy, who the wild family intends to eat. The wild ones, made up of father Papa Jupiter and mother Mama, daughter Ruby, and brothers Mars, Pluto, and Mercury, are revealed to be cannibals who prey on those who come into the backcountry. Once they become set on their course of torturing the Carters, both physically and emotionally, there is nothing to stop them. Only when the remaining family bands together, and with the help of The Beast and Ruby, can the Carters hope to stop the death and murder that has befallen them.

Watching this film for the first time had two effects on me. One, it was highly entertaining and contained many of the trademarks that are noticeable in Craven’s earlier work. The other is that this film really does land as disturbing. Like most films that fall into the category of revenge horror (such as I Spit on Your Grave or The Last House on the Left), this film touched on events that can’t help but turn the skin and make your blood curdle. Such elements are why this film is so successful.

All the performances are great but I want to draw special attention to Robert Houston who played Bobby with a strength and resourcefulness not found in most similar characters of his time. The only other performance in my mind that was as powerful was from James Whitworth as Papa Jupiter, who is scary and intimidating and commanding all at once.

The social commentary of the movie has been argued about for years but usually, people look at this film as regarding the divide between the rich and the poor and the never-ending struggle those who are on the fringes of society suffer at the hands of those who would exploit them. Unfortunately for this interpretation, the audience is almost universally aligned with the Carters because of the terrible fate which befalls them.

If you have never seen this film, do the same thing I did and find a copy quickly. I was so much happier than I thought I would be after watching this classic. It is most definitely entertaining and thought-provoking, while also presenting the audience with a fair amount of material to consider. Pick up this classic today and fall back into the warm, creamy center of a Wes Craven film.