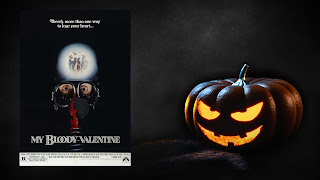 October can mean only one thing here at The DreamCage - it's time to count the days til Hallowe'en with David Ames' Hallow-vent Calendar of horror films! Day 13 is 1981's My Bloody Valentine ...


Often it is hard to find a horror movie that doesn’t feel exclusively Halloween in nature. Most horror movies focus around fall, especially slasher films. Today’s film is one which does just that, utilizing the date of another holiday to strengthen the movie: this film is George Mihalka’s 1981 slasher My Bloody Valentine.

The film begins with a female miner stripping for her partner but is murdered by him. Next, we are shown the mayor of Valentine Bluffs reinstating the annual Valentine Day dance, which had been banned for 20 years previous. Before, two mining supervisors accidentally left numerous miners in the shaft so they could go to the dance and an explosion caused them to die. Here we are also told the story of Harry Warden, the only surviving member of the crew, who was driven crazy and to survive resorted to cannibalism. When he eventually escaped, Warden murdered the supervisors and swore that if the dance ever happened again, there would be hell to pay.

Warden was placed into a mental asylum and 20 years later the dance is reinstated. While the youth in town is excited about the dance, random disturbing things begin to happen. It starts with a box of chocolates which contains a human heart along with a threat to stop the dance. When a person in town is murdered and their heart removed, the town contacts the asylum only to discover that they have no record of Warden on their grounds. The dance is cancelled but the kids decide to have a party anyway and in classic slasher movie fashion, they are picked off one-by-one. I’m not going to give away the ending but it is genuinely unnerving.

This film is everything you want a slasher movie from the 80s to be: it is funny, and clichéd, and over-the-top. The performances aren’t anything spectacular, aside from Neil Affleck, who plays Axel with a maniacal twist that adds real weight to the performance. His laughing alone is enough of a creep factor to warrant mentioning in this review.

While the story and premise are ridiculous, slasher movie fodder which comes across as both unoriginal at best and downright ripped off at worst, the execution is where the movie really shines. In the same vein as films like You’re Next or Hatchet, this movie knows what it is and fully embraces the genre, making the experience feel less stilted and more reverent.

The real star of the film is the surprisingly well done practical effects and gore. For a film in this genre with this low of a budget to have effects as wonderful as this are shocking. My personal favorite is the scene with the hotdog water. It looks great and is incredibly effective. In fact, the film was disparaged by professional critics for its portrayal of violence; many believed it was just too much.

If you are a fan of the slasher genre and you haven’t seen this classic, you need to do yourself a favor and check it out. It is so much fun and delivers on a visceral level. It has the wonderful effect of feeling familiar. You know what is going to happen almost every step of the way (except the twist) but you don’t care because the journey of getting to the end is just too much fun.