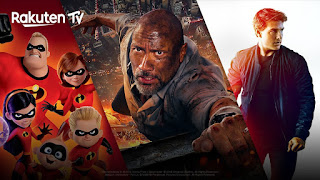 If you’re looking for high octane action without having to move an inch from your sofa this November, Rakuten TV has everything you need...

Some of the most memorable moments of film have been accomplished by Tom Cruise risking life and limb with incredible stunts throughout the entire Mission: Impossible series. The latest addition to the fan favourite series is no exception with Cruise even breaking bones during filming in a quest to give audiences an adrenaline rush by just watching Mission: Impossible – Fallout. This is just one of the films to get your heart racing on Rakuten TV next month.

Box-office favourite Dwayne Johnson becomes wrongly convicted felon, Will Sawyer in Skyscraper. Will must make his way up 225 storeys of a burning building in order to save his family who are being held by criminals. Catch his heroic efforts in blazing 4K HDR. Meanwhile your favourite animated superheroes, the Parr family (better known as The Incredibles), are back for round two after a 14-year wait, giving fans a superbly satisfying follow up with new villains but the same beloved, stretchy heroes.

Talking about heroes that can achieve unbelievable feats, Ant-Man and the Wasp is a perfect example - big or small what can’t these two accomplish? Paul Rudd and Evangeline Lily team up against new villain Ghost but get more than they bargained for.

If you’re in a more musical mood, what is better than indulging in the ultimate guilty pleasure of singing and dancing along to Mamma Mia! Here We Go Again. You’ll be able to enjoy the glowing ensemble cast of Amanda Seyfried, Lily James, Pierce Brosnan, Colin Firth, Stellan Skarsgård, Meryl Streep, Cher and more, who are all the more glorious in 4K HDR so you won’t miss a single thing in this fantastically fun film.