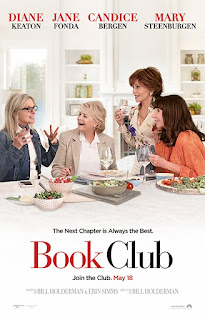 Steve Taylor-Bryant looks deep into his own cliched existence as he tries something new, a romantic comedy full of old people. Would he learn anything? Find out as he reviews Book Club…


I must be honest and say a few years ago the thought of a film about women of a certain age and their tastes in books and how their lives may or may not change would have made me cringe. I really don’t know why, some of the stars of such films are the best the screen has ever had, but I’m a bloke and I suppose I lived a cliche. Then I watched a film my wife was dying to see, The Best Exotic Marigold Hotel, and my eyes slightly opened to a different type of storytelling. Then, trusting my wife’s gut again, I watched Grace and Frankie on Netflix and was blown away. I knew I really liked Lily Tomlin, but my knowledge of Jane Fonda was confined to Barbarella and The Newsroom. Watching a funny show with two incredible women delighting me is when I realised that A) I’m now old and life is about more than Street Hawk, and B) that cliched me rightly belongs in the past so bring on more great drama and comedy to stimulate and educate.

Well, there is no better example of humour-based life changing than Book Club, the story of four friends Diane (Diane Keaton), Vivian (Jane Fonda), Sharon (Candice Bergen), and Carol (Mary Steenburgen) who get together as a book club once a month. After reading a dull book, they choose Fifty Shades of Grey as that month’s opus and so sets of a chain of events in all their lives as the eyes and hearts open to new experiences. Vivian, a successful businesswoman and hotelier runs into an old flame, Arthur (Don Johnson) and a whole raft of what ifs flood her thoughts. Divorced high court judge Sharon discovers online dating (there’s a scene with Richard Dreyfus that just cracks me up), whilst Carol wants to put a sexual spark back into her marriage to Bruce (Craig T. Nelson). This leaves widow Diane who is torn between staying near her friends and moving to live with her overprotective daughters. On a journey to see her daughters she meets airline pilot Mitchell (Andy Garcia).

What happens afterwards isn’t new, various romantic comedy tropes are used, but they are heightened and executed so well by an ensemble that shows their experience. Fonda is fantastic, treading a line carefully between her Grace character from the Netflix show and the ruthless opinionated Leona Lansing from The Newsroom so, whilst I may not have been familiar with the idea of Fonda in a romantic comedy, I never felt excluded just because of my own knowledge failings. The relationship between Mary Steenburgen and Craig T. Nelson was astounding and, whilst I’ve seen these "failing then finally success" marriage storylines play out before, the chemistry between the two just made me care so much about their outcome. I only really knew Candice Bergen from Murphy Brown years ago, but I’d watch her again in something off the back of Book Club and, as I’ve mentioned before, the scene with Richard Dreyfus is worth the price of the DVD alone. The biggest takeaway I got from Book Club though is a reaffirmation of how good an actress Diane Keaton is. Her character had the biggest roller coaster to ride and the most interactions with differing personalities and Keaton completely nailed every aspect of the performance. Her scenes with her friends were genuine and you felt the tear in her heart she was feeling, the scenes with her daughters, heartfelt and funny, but it’s her scenes with Garcia where she excelled. There was just such a natural pairing of these two. Often, with huge stars, you get one overpowering the performance of the other but not here. Keaton was perfect, and Garcia was more complementary to her character than grabbing the screen for himself and I spent the entire film hoping for happiness for both, a first for me with a romantic comedy.

Book Club was a genuinely moving and deft comedic slice of cinema with top performances by four women who, through my own failings as a human and as a cinephile, I had never really given the chance or respect to that they deserve. No longer will that be the case. No longer will I judge a project or a genre with my cliched male entitlement. It’s not fair on some great performers and writers but, mainly for selfish reasons, I’ve obviously been missing out on some fantastic stories and entertainment.