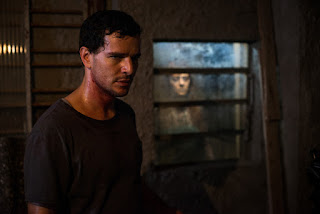 While most of the horror flicks we get to see in the cineplexes are familiar franchises or films which too often tend to drag out the same old tropes, one of the best aspects of being able to attend film festivals is seeing how other nations give these tropes a unique twist or come up with new and original horror ideas.

One such example is Brazilian writer-director Dennison Ramalho's horror The Nightshifter (original title Morto Não Fala). Despite being set in the familiar horror milieu of a night-time morgue, the director has come up with a promising premise which he uses to craft a gory, ghostly and twisty thriller.

The story concerns diligent morgue assistant Stênio (Daniel de Oliveira) as he goes about the unpleasant but necessary task of stitching up bodies and clearing up the mess after the pathologist has finished his examination. His willingness to do a job that few people would want to do is not the only thing that makes him unique. What makes him truly unusual is, when no-one else is around, the corpses of the dead are rather keen to talk to him – often divulging some of their most treasured or alarming secrets.

Stênio doesn’t know how he has this strange ability, or why he should be the receptacle for the words of the dead. Neither has he ever told anyone else about it, aware that he would not be believed or that he might be considered delusional.

He tries to use his ability for good, discovering the names of unidentified corpses and anonymously calling their families so that at least they know what has become of their loved ones. Otherwise Stênio carries the secrets of the dead in silence, easing his burden by visiting his neighbourhood bakery early in the morning after his shift where the owner Jamie, (Marco Ricca) serves him alcoholic drinks, often on credit.

Baker Jaime’s wife is in a coma and his daughter Lara (Bianca Comparato) is often late for work because she visits her mother in the hospital. She is resentful that her father seems to have forsaken her sick mother and never makes the effort to visit her himself.

When Stênio finally arrives home hoping to relax with his family after a long night at work, he is immediately berated by his pretty but shrewish wife, Odete (Fabiula Nascimento). She launches into the many faults she finds with her husband - Stênio isn't home enough, he doesn’t help with the kids Edson and Cica, who drive her crazy, he doesn't make enough money and he disgusts her with the smell of the morgue that he carries into the house and indelibly on his clothes and body.

Stênio responds that he works as hard as he can to make sure that his family want for nothing and live in relative comfort, but that's does not satisfy Odete, who appears to have some money of her own from working part-time in a local shop.

The sneering corpse also informs Stênio that his wife Odete is cheating on him with Jaime, the man who owns the bakery that he frequents and at which he gets drinks on credit. Stênio is distressed but wants proof which he receives when he sees Odete getting into Jaime’s car one evening. Their intimacy clearly indicates that they are going out for a tryst.

Once he has seen her infidelity with his own eyes and remembers her continual rebuffs and insults, he becomes incensed to the point where he makes a rash decision. He uses some information gleaned from the lips of a dead gangster thug to frame Jamie as a police informant and then awaits the inevitable retribution from the local criminals.

However, the secrets of the dead are apparently sacrosanct, and divulging one for personal use amongst the living carries a terrible penalty - Stênio is now a ‘marked’ man. Before long he finds that his betrayal of the dead has placed himself and his children in danger, as the other corpse that arrives at the morgue is his vengeful wife Odete – also killed as a too vociferous witness to Jamie’s execution.

What might at first seem reminiscent of films such as The Sixth Sense is here used to create something original and terrifying. Director Dennison Ramalho gives us gory corpses, spiteful ghosts and open graves, but there is a sense in which Stênio's woes are also a manifestation of a deeper cultural malaise.

The film is set in São Paulo, the most populous city in Brazil and one of the most dangerous. The shabby look of the city and its interiors reflect the characters’ experience of life there – gritty, grim and drab. Shot mostly by night, punctuated by the gallows humour of ambulance drivers who pick up the corpses left at the scene of gang shootouts, murders and suicides, this is a Brazil coloured predominantly in greys, dull greens and browns – the very colours of decay.

Ramalho uses the dilapidated state of the city to contribute to the tension felt throughout the film –dark rooms and cluttered, disordered streets, give the feeling that we are constantly on the brink of anarchy or chaos - every night Stênio sees people who have died pointlessly. One scene introduces the disaster of a mud-slide which over-fills the morgue with filthy dead bodies and a multitude of voices demanding the unfortunate Stênio's attention.

The belief that certain people are able to converse with dead bodies and learn their secrets is an ancient belief found in various parts of the world. The Nightshifter seeks to exploit this old superstition in a modern context. The story explores the dark side of humanity and the destruction people are capable of when they give vent to extreme emotions such as anger, revenge, guilt, and loneliness.

The NightShifter (Morto Não Fala) marks Ramalho’s debut as a feature director, and although he has made other short films this proves to be an engrossing and assured initial offering. Sad to say the film may only get a screening on the festival circuit, but if horror fans do get the chance to check it out, it will make a refreshing change from this year’s current crop of evil nuns, witches and masked bogeyman killers.