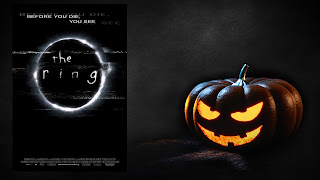 October can mean only one thing here at The DreamCage - it's time to count the days til Hallowe'en with David Ames' Hallow-vent Calendar of horror films! Day 18 is the 2002 remake The Ring ...


Read the review of the original Ringu here.

There is always something inherently fearful about bringing over a horror film from another country and culture. Many things suffer whether it is the language barrier, the translation of the events, or the cultural background needed for a film to really impact the way it would in its country of origin. That is why, when films are brought here, especially from Asian countries, small changes usually must be made or else the scares will lose some of their potency. These small changes helped to create one of the very first horror films I can remember watching multiple times in a row. Today, we are talking about one very such remake, Gore Verbinski’s psychological masterpiece: 2002’s The Ring.

This film basically follows the original plotline almost perfectly. The film begins as two girls, Becca and Katie are hanging out and talking about the legend of a video tape which, if you watch it, calls you and tells you that you have seven days left to live. That night, something happens and Katie winds up dead.

We are then introduced to Rachel, the teenager’s aunt and a Seattle journalist, who at the behest of her sister investigates the death. Doctors cannot determine a cause for the death or the facial disfigurement and her mother wants answers. In her research of the death, Rachel also learns that Katie’s friends were killed in a car accident the same night. After visiting with Becca, who has had a mental breakdown after witnessing Katie’s death, Rachel discovers that the deceased kids all stayed together in a remote cabin and watched the supposedly “cursed” videotape.

Rachel goes to the cabin and finds the video. Not believing the legend, she watches the tape and when it ends, the phone rings and someone whispers “seven days.” Enlisting the help of her ex-boyfriend Noah, Rachel starts to research the tape itself and she and Noah make a copy for him to keep. While doing so, she begins to experience strange things. She has nosebleeds often and she begins to vomit up strange chords of rope.

In analyzing the tape, the couple track the images to a remote lighthouse where a woman named Anna committed suicide after a number of her horses dove off the cliff of the island near the lighthouse and died. Quickly after this, Rachel and Noah find their son, Aiden, watching the tape and Rachel knows that now she must find a way to stop the curse from happening or else her son will die as well.

As Noah and Rachel search the island and Anna’s old house, they discover a tape of an interview with Samara, Anna’s daughter, who is discussing with a doctor that she has telekinetic and psychic abilities. They recognize images of trees from the cabin where the tape was found and rush there to discover where Samara is located. Under the cabin is a well and the couple discovers that the little girl was drowned because of her abilities. By removing her remains from the well, Rachel lasts past her seven days and it seems as though all is now safe.

BUT, in the realm of horror movies, we all know that isn’t always true. When Rachel tells Aiden about what happened, he looks shocked, saying, “You weren’t supposed to save/help her.” The ending is spectacular but I won’t give away what happens exactly. You’ll have to revisit this film for that.

Performances across the board on this film were great. Martin Henderson plays Noah and is relatable and sympathetic. His chemistry with Rachel is on point and he sells every scene he is in. David Dorfman plays the creepy Aiden and does so with gusto. He is believable and interesting and just the right amount of creepy to add to the story. Brian Cox is wonderful as Richard Morgan, Anna’s husband, and his intensity leads to the climax of the film in a way that few actors could pull off.

Naomi Watts is great as Rachel. She perfectly balances struggling mother with career woman. She is sexy but not distracting and her care for everyone comes across as powerfully as her inner strength and resolve to succeed. The film would not be what it is without her. Lastly, we need to talk about the adorable Daveigh Chase who plays the supernaturally murderous Samara. She is so interesting to look at and carries herself, even at her age, with a kind of power that is intimidating. Her performance is a testament to what child actresses can do.

This has always been one of my favorite horror films. I think that the production did some great thing to address the lack of cultural relativity that the first film carried. They made up for that by filling in a slightly different backstory, one that would make sense to western audiences, but they never pulled away from the source material. This film carries as much emotional and psychological weight as the original and, for my money, capitalizes in the end somewhat better than Ringu. It may just be my uncultured western mind, but although Ringu is a classic, I would have to throw my vote between the two behind The Ring. It never disappoints.