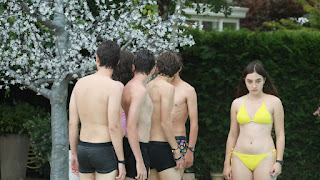 School’s Out is Sébastien Marnier’s second feature and is a screenplay based on a 2002 novel by Christophe Dufossé. Marnier, himself originally a novelist, creates an atmosphere of unease and foreboding in a film which comes across as a moody and chilling conundrum.

The story concerns a substitute teacher, 40-year-old Pierre Hoffman (Laurent Lafitte), who is put in charge of a class of gifted adolescent students after their home-room teacher suddenly and inexplicably commits suicide by leaping out of a classroom window.

“St Joseph’s is a school with an excellent reputation”, the headteacher is at pains to stress, and he is clearly concerned by the bad publicity the suicide may have produced and the effect the tragedy might have on his most academically valuable pupils.

Both Pierre and the Headteacher assume that the kids will be traumatized by recent events, but they seem oddly emotionless, concerned only with not wasting time and the continuation of their classes. This puzzles Pierre, because he soon finds that they are, in any case, substantially ahead of other students in their year group.

The two class representatives are the formidable Apolline (Luana Bajrami), and the delicate but intense Dimitri (Victor Bonnel). They are not shy about speaking out, and when they do they are unnervingly direct and precocious. Their candour and impatience surprises both Pierre and the viewer.

Particularly disquieting is the unusual closeness of a clique of six teenagers headed by Apolline. Teacher Pierre is troubled by their co-dependency, which seems to create a ‘Midwich Cuckoo’ aura of impenetrable exclusivity, isolation and invincibility.

One of the quieter members of the clique, Brice (Thomas Guy) comes to school with signs of having received a beating, but the incident is hastily glossed over by the school’s administrative personnel as a mugging outside their jurisdiction. Pierre seems to be the only one concerned, as Brice’s injuries are also impassively accepted by his cohorts, who shrug it off as an attack prompted by jealousy.

The behaviour of the group and even of the school administrators begins to strike Pierre as odd and disengaged. After a chance sighting, he takes the chance to follow the six companions while they are out of school. He witnesses a series of mysterious and dangerous ritualistic ordeals that they impose on each other and that they stoically endure and film on their phones.

Concealed in their accustomed meeting place – a disused quarry outside town, Pierre comes across a collection of DVDs which he clandestinely removes to watch in order to understand their hidden lives.

Meanwhile, his fellow teachers seem more interested in going out after school drinking and dancing, rather than engaging with the nervy senior staff or worrying about the aloof students, labelling them merely as entitled rich kids with an exaggerated sense of superiority.

Then, while home alone working on his thesis about Kafka, Pierre starts to receive prank calls from an unknown number. This begins to make him feel unsettled, then threatened. His new charges now appear increasingly menacing and secretive, and as Pierre’s experiences begin to take a distinctly ‘Kafka-esque’ turn, he starts to suspect he is being personally targeted.

School’s Out is not the kind of film which slots easily into any particular genre. Its sense of dream-like, twisted reality might label it as a psychological thriller, but the often unnatural and otherworldly way that the kids are portrayed makes them seem sinister, giving the film undertones of horror.

The ominous atmosphere is heightened by Romain Carcanade’s hallucinatory cinematography which emphasises the stifling, clammy feel of the French summertime. Zombie Zombie’s menacing retro-electronic score (recalling horror films of the 80s) also helps to promote a sense of unease.

However, as the film continues, the pacing seems to stall as Pierre experiences a round of vaguely odd events and his investigation goes in circles without advancing the storyline or expanding our understanding of the characters.

Ultimately, School’s Out appears to present us with an ambiguous picture of the self-destructive behaviour which might be engendered in highly-intelligent youngsters when they examine the state of the world and conclude that there is no hope.

The difficult youngsters are ignored by the adults who continue to trivialize or explain away awkward events. The adults live a blinkered existence, wilfully excluding mounting evidence of disaster. There seems to be a marked lack of connection between the generations that only Pierre is trying to bridge.

The film seems to indicate a sense of nihilism in the future generation, embodied by these ultra-intelligent young people who have lost faith and patience with the adults that insist on living in fantasy and ignorance. As one of them declares in exasperated resignation: "It's too late, there's no future. You don't want to face the truth."