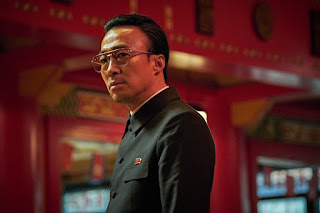 Tony Cross is our reviewer who came in from the cold to watch The Spy Gone North...

The Spy Gone North, directed by Yoon Jong-bin is based – loosely I imagine – on the story of Park Chae-seo, a South Korean spy who infiltrated North Korea in the 1990s as part of a campaign to find out more about the North Korean nuclear programme.

This isn’t a James Bond action thriller, but a South Korean Tinker, Tailor, Soldier, Spy*. Whilst the story might be exaggerated it is more about the routine of spying.

Park Chae-seo, played rather wonderfully by Hwang Jun-min, basically undoes his life to create an illusion. It’s a time-consuming process that looks like it might not work. The tension in this film comes from the possibility that Park Chae-seo’s cover will be blown or that his best attempts to attract the attention of the North Koreans will fail. The action takes place in restaurants and hotels mostly. It makes spying seem not dissimilar to being a salesman out in the field, which Park Chae-seo’s cover as a businessman just reinforces. At least to this viewer.

The apparently realistic approach isn’t the only reason this feels like a le Carré story. There’s also the realisation that our opponents are not necessarily who we need to worry about. That you can gradually come to realise that those you are supposed to be fighting are those who you have much in common with. This comes through mostly in the relationship between Park Chae-seo and Ri Myung-woon, his North Korean business partner. Ri is played by Lee Sung-Min who does a fantastic job of making his character human.

But then that’s true of every performance. Even Gi Ju-bong, who plays Kim Jong-Il, isn’t a ridiculous caricature. But then you realise that, whatever your feelings about this tiny man and his tiny dog and however much you can’t help but think about Team America World Police when he first appears this is a man with terrifying power. The build up and ceremony prior to his appearance makes this clear. It is the way people behave around him that lets us know what he is capable of, rather than anything he actually does.

We get to see the terrible conditions in North Korea and the devious ways that Kim-Jong Il and his comrades are trying to bring money into the country, for example flogging antiques from the North in the South. Yoon Jong-bin doesn’t hammer home political points. Indeed, the politicians of South Korea – or some of them – are shown to be as corrupted and venal as those of the North. Desperate to hang on to power at any price and as committed to power over people as any North Korean Party hack, it becomes clear that the real enemy in this film are those politicians who suck up the benefits of wealth and influence regardless of how the rest of us live. So, just politicians basically.

How true to the true story this film is I don’t know, but I’d like to find out. It certainly tells an interesting story about the corrupting nature of power on men in power**. You only need look at the desperate way our current politicians are clasping onto office in the face of impending doom to realise that something must be keeping them there and it doesn’t appear to be any kind of great moral crusade.

That pervading air of cynicism – that might not be the right word- or the gradual feeling of disappointment that settles upon Park Chae-seo as he realises that his mission is gradually being eroded from one that he can take pride in and which makes the risks he is taking seem worthwhile to some kind of dirty party-political exercise.

If you liked Tinker, Tailor, Soldier, Spy then I’m pretty convinced you’ll like this, but if you like your spy stories a little more Bond then perhaps this might not be for you. Or like me you have that weird capacity to enjoy both and don’t see art as a zero-sum exercise where liking one thing precludes you from liking another.

Go see it and find out.

**And they are all men in this film.