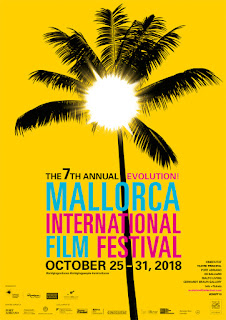 While London is a-buzz with film festivals amid the dark days of autumn, deep in the Mediterranean, another film festival is just about to kick off...

Evolution Mallorca International Film Festival (EMIFF) is one of the fastest growing and exciting film festivals in the Mediterranean. An excellent hub for networking with some of the brightest minds in filmmaking, EMIFF is as intimate and invigorating as it is breathtakingly gorgeous.

Filmmakers and industry professionals visit this island paradise to discover "the next great generation of filmmakers" The festival presents a diverse selection from world premieres to film festival favorites, short film screenings, Q&As, a Drive-In Cinema section at the Philip Stark designed Port Adriano, an Art & Cine event at the Gerhardt Braun Gallery and Industry events such as the Producers Club at the modern museum of contemporary art Es Baluard.

Said EMIFF Founder and Executive Director Sandra Seeling Lipski, “EMIFF is more than a film festival; it provides a forum for cultural understanding and enriching educational opportunities, focusing on showcasing a diverse collection of both local and international independent films.”

“For seven days and nights, EMIFF invites you to join us on a journey to far away lands, intimate stories and unexplored realities. With the intention to encourage positive change, EMIFF’s films will push your limits and raise your consciousness. Our goal is to bridge bultures and build a stronger and more purposeful community. I believe we have to recognize each others individual stories and dreams in order to realize, that at the end of the day, no matter where we are from, we are not that different from each other.”

“I am particularly excited for our Evolution Honorary Award and Evolution Vision Award recipients this year, globally acclaimed actors Marisa Paredes and Mads Mikkelsen. Ms. Paredes has captivated generations, known around the world for her work over five decades, including captivating audiences in her work with Spanish master Pedro Almodóvar. Her extensive and prolific career is defined by a body of international films defined by risk and prestige. Danish actor Mads Mikkelsen remains a singular European actor who eloquently balances award-wining performances in visionary European films with a successful career in Hollywood blockbusters. From his eloquent work with director Susanne Bier and his Cannes Best Actor winning performance in Thomas Vinterberg’s The Hunt to his standout performance in the Star Wars series, we celebrate Mr. Mikkelsen as visionary actor who inspires audiences, breaks boundaries and bridges cultures” said Lipski.

Now in its seventh year, EMIFF has attracted over 4000 attendees from over 30 countries worldwide. In 2018, EMIFF will continue to expand the presence of international filmmakers and strengthen its position within the worldwide film festival calendar. Since its 2012 inception, the number of films screened has tripled, counting over 100 movies from 25 countries during the 2017 festival program.