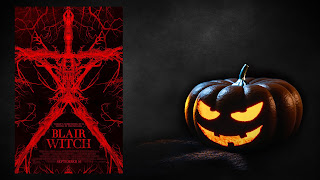 October can mean only one thing here at The DreamCage - it's time to count the days til Hallowe'en with David Ames' Hallow-vent Calendar of horror films! Day 17 is 2016's Blair Witch  ...


Read the review of the original The Blair Witch Project here.

I was a bit caught off guard by today’s film. I thought it was a remake of an original, but as I dove deep into the movie, I realized it was more of a direct sequel. What it lacks in originality, this film makes up for in wonderful camera work and understated practical effects. Today we are looking at Adam Wingard’s 2016 found footage film, Blair Witch.

The film opens to a young man named James finding a YouTube video in which he is certain he sees his sister. The sister, Heather, went missing in 1994 in rural Maryland while filming a documentary about the Blair Witch. James is convinced by the video that Heather is still alive out in the woods and puts together a team of people to go into the forest with him and find her. Along for the ride are James’ best friend Peter, Peter’s girlfriend Ashley, and Lisa, a film student who is filming her own documentary about James’ search.

As they reach the area, they first meet with Talia and Lane, the posters of the YouTube video, who claim to have found the tape and will take the group to the location if they are allowed to tag along. They are very superstitious about the area and believe whole heartedly in the legend of the Blair Witch and they want to capture it on film for their YouTube account. Seeing no other way, the group allow the two to join and they head off into the woods.

As they camp in the woods for the first night, there are strange sounds echoing through the trees. When the group awakens, they find that there are stick figures placed all over their camp. Visibly shaken, the group decides to head back to their cars but Lisa notices that Lane has twine and after some questioning, it is discovered that he and Talia planted all of the stick figures in order to make the group believe. They are expelled from the contingent of searchers and the group tries to head back to their vehicles but after hours of hiking end up back at the camp site. An injured Ashley can’t go and they have to camp for another night. Trying to find their location, Lisa uses a drone which only shows forest as far as the eye can see.

Ashely’s cut is grotesque and seems to have something living inside it so Peter leaves her in James’ care and goes to search for firewood. He is hit by a falling tree and disappears. Back at camp, Lane and Talia appear and tell the group that they have been wandering in the woods for five days. From here, the movie takes some crazy twists and I don’t want to ruin something so new so I will stop with the plot synopsis. Suffice it to say, this film takes quite a few turns while remaining relatively close to the source material.

The choice to stay with found footage, even though at this point in cinema it is overused, works for this film. The addition of the head mounted cameras creates a very good POV effect and is a little less shaky than a handheld camera. We also get some great shots of the actors’ faces as they console one another. The drone was also a nice touch and the small role it played in the film delivered one of the first real creep-factor moments of the entire movie.

Also, best scene by far, is when Ashley snaps one of the stickfigures. What happens next caught me completely off guard and I had to rewind multiple times to make sure I really did see what happened. You’ll know when you get there.

I can’t say enough about how much I enjoyed this film. It was a breath of fresh air considering the online hate this movie received. I thought that, while it may have relied too heavily on jump scares, it maintained the focus on the witchcraft legend and utilized the original film’s iconography in such a way that it really felt like a continuation. I can’t say that I like this film more than the original because it isn’t a remake, but I can say that you should definitely give this a shot, especially after watching the original first. You won’t regret it.