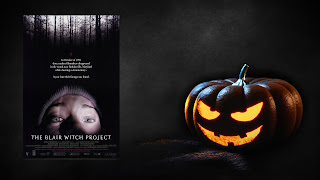 October can mean only one thing here at The DreamCage - it's time to count the days til Hallowe'en with David Ames' Hallow-vent Calendar of horror films! Day 3 is the classic found footage film, The Blair Witch Project...

Anyone who has enjoyed the horror genre has noticed a stark and drastic shift from the types of movies being released. The found footage genre has exploded and now every person who wants to make a low budget horror film seems to create one with this genre’s conventions. The first real movie to make that model viable was Daniel Myrick and Eduardo Sanchez’s 1999 film The Blair Witch Project.

Set in the deep woods of rural Maryland, The Blair Witch Project is the footage found on cameras discovered in the woods weeks after three film makers, Heather, Josh, and Mike, went missing. The three were creating a documentary on the mythical Blair Witch. The film follows their attempt to discover the legend of the Blair Witch through interviews with people in the nearby town, and their exploration of the woods at the center of the legend. They hear stories about children disappearing and men being murdered by a serial killer earlier in the century, who supposedly worked for the Blair Witch. The three filmmakers get lost on the woods and strange things begin to happen, all which they capture on film in hopes of using it later in their documentary. The three encounter strange burial grounds, voodoo style wood dolls hung everywhere, and ghostly phantom children who attack their tents each night. Eventually one filmmaker goes missing and the film crescendos in what is still considered the best of the found footage endings.

There isn’t a ton to say about this film other than it still holds up and is effective. The performances are all really solid, but then again, they would be because to make this movie, the directors dropped the three actors into the woods and didn’t tell them what was going to happen. Most of the fear we see on screen is genuine terror as these three performers are tortured night after night. Heather and Josh are great but the most convincing of the three is Mike, who really sells the aspect of being lost and then of becoming somewhat unhinged.

The marketing of the film took a page from Cannibal Holocaust by making the actors stay out of the public eye for a year to help sell the idea that the footage was found in the woods. This aspect of the marketing was incredibly successful and helped the movie that cost $60, 000 gross over $240 Million.

If you have never had the chance to watch The Blair Witch Project, do yourself a favor. Turn all the lights off, crank the sound, and enjoy. You need to pay attention to the interviews in the beginning as they help to explain the final shots of the film. Also, be aware that you have seen a lot of the techniques used in this film but remember that although they may seem clichéd, this film was the first to really do them. Enjoy a piece of pop culture history that became the first film that ever when “viral.”