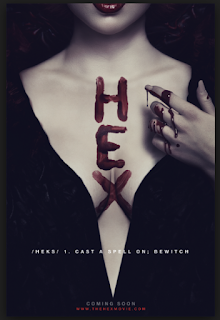 Fresh from its run at Raindance Film Festival, did Steve Taylor-Bryant fall under the spell of Hex?...

A young backpacker's holiday romance turns into a nightmare when the girl of his dreams starts to suffer from strange and terrifying blackouts, and in their desperate search for a cure, the couple become the unwitting playthings of a vengeful and horrific entity.

There is a lot to like in Rudolph Buitendach’s latest feature and I was wondering how he would top 2017’s superb Selling Isobel. Well he did it by making Hex. Not being the biggest fan of the horror genre, I often find myself tuning out during screenings, becoming bored, or far too sickened to continue. I’m not sure why, it's just a genre that has never really appealed to me, but there are a few little nuggets of psychological brilliance that get through my defences and Hex is one of those. I never did the whole travelling lark, I went straight from secondary school into the workplace, got married, had children, so the idea of travelling to exotic lands, in this case Cambodia, and having a holiday romance is not something I can relate to but it's something that, in most films, looks like a debauched bit of fun if you are that way inclined. One thing is for sure though, you don’t want to have a holiday romance with Amber!

This film is basically a possession movie, but it has got an air of quality that elevates it far above ‘run of the mill’ type horrors. There is an innocent and unformed acting style to both Jenny Boyd, as Amber, and Kelly Blatz, as Ben, that is hard to accomplish with perhaps better-known stars and it really allows the viewer to immerse themselves in the journey and adds a realism to proceedings that you wouldn’t ordinarily get. I mean no disrespect by the unformed comment, if anything it is a compliment to both actors, as it led to me completely buying into their romance and to the shocking events that follow. Whilst the story is an interesting one, it is not a new idea and so I was pleased to find that writer Christian Piers Betley, along with Rudolph Buitendach, have added a little twist to the plot that stops the story becoming generic. Then, when you add in the Cambodian backdrop, some beautiful lighting and cinematography with some of the sharpest editing I think I’ve ever seen in a film, what you end up with is an intriguing slice of psychological horror that appeals to more than just the usual fans.

Hex is a rare treasure amongst a flooded genre that stands out for taking something simple and elevating it in a beautiful and interesting way. For those of you already familiar with the work of Buitendach you will get a lot of anticipation from knowing that Hex is every bit as exciting and different as Selling Isobel was and, to those of you not at all familiar with what Rudolph Buitendach can do on a screen, well, prepare to become fans. Hex is incredibly well portrayed, beautiful to look at, and edited to perfection with a nice little twist an old classic tale. Well done everyone.