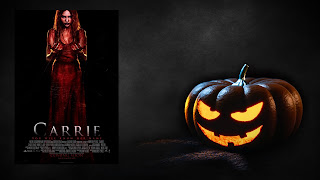 October can mean only one thing here at The DreamCage - it's time to count the days til Hallowe'en with David Ames' Hallow-vent Calendar of horror films! Day 16 is the 2013 remake of Carrie ...


Read the review of the original Carrie here.

Our second remake of this year is one that, for the life of me, I couldn’t understand why the made in the first place. This film is near perfect in its original form so the need to remake it seemed less like a desire to create something good and more like a cash grab. Luckily, I went into it with an open mind and came out very pleasantly surprised. Today’s movie is Kimberly Pierce’s 2013 remake of Carrie.

This film follows the events of the original movie pretty closely. Some of the events are updated for the time but basically it is the same plot. One major difference is the opening which shows Carrie’s mother, Margaret, giving birth in her own bed. She holds scissors close to the newborn, ready to murder it in the name of God but decides instead that she loves the baby girl.

From here on out, the film is pretty accurate to the original film. Carrie is a bullied, naïve young girl who has never been taught about many things, especially her own body. When she starts her period, she is shocked and is convinced that she is bleeding to death. Her frantic cries are answered by mockery and ridicule, and eventually, just as in the original, the girls begin throwing tampons and pads at her, chanting “plug it up,” while she screams and cries on the floor of the shower. A new addition to this high school world is that of cell phones and this entire scene is recorded by Chris, a popular but sociopathic teenager who is spoiled by her rich father and feels as though she can get away with anything. She eventually posts the video to YouTube, furthering Carrie’s embarrassment.

As the film progresses, Carrie discovers that she has telekinetic abilities and begins to practice them. When she is mocked by a teacher for reading a poem in class, the sweet and charming Tommy Ross stands up for her. Feeling guilty for her involvement in Carrie’s bullying, a local nice girl named Sue, Tommy’s girlfriend, convinces Tommy that he needs to ask Carrie to prom.

We are also treated to more and more insight into just how abusive Carrie’s mother is. It gets to a point where Carrie must use her abilities to live comfortably as a young woman. Chris, who has now been suspended for mouthing off to Miss Desjardin, the teacher who was punishing the bullies, has made it her personal mission to get back at Carrie. She and her bad boy/criminal boyfriend, Billy, kill a pig and drain its blood, planning to drop the bucket on Carrie after she is elected prom queen (they also set up the ballots so that she would win).

At prom, Carrie begins to come out of her shell, laughing with Tommy and some other students and even dancing. When she and Tommy are elected prom king and queen, Chris goes through with her plan. While Carrie freezes on stage, covered in blood, Chris and her friends have also setup the video of her in the shower to play in the background. The bucket falls, hits Tommy in the head, and kills him and when Carrie realizes this, she lets her full powers take hold and she proceeds to murder damn near everyone, eventually setting the school on fire. She then tracks Chris and her boyfriend into town, exacting revenge on them before she heads home.

When she arrives, she is attacked by her mother and must kill her before she can stab Carrie again. As she struggles with the events that have just elapsed, Sue rushes in to help her. Carrie informs Sue that she is pregnant before forcibly throwing her from the house. Then she brings the entire building down around her, killing herself and ending her pain.

Performance-wise, I feel like this film is just as strong as the original. Judy Greer is a great Miss Desjardin. She is strong but caring, and she really comes across as a teacher who cares about her students. One of the better changes in the film is that while Carrie kills almost everyone in the gym, she actually rescues Miss Desjardin, showing that she does have a conscience. Ansel Elgort (Tommy) and Alex Russell (Billy) are both serviceable in their roles. Billy is much more of a bad boy than in the original and Tommy is much more of a jock but both roles are still well done. Portia Doubleday is a treat to watch as the entitled Chris. She is heartless and sociopathic, almost over-the-top in her performance, which makes her punishment that much more fulfilling. Lastly, Gabrielle Wilde plays Sue with a softness and conscience that makes her much more relatable than the original, in my opinion.

The two main stars are both spectacular. Chloe Grace Moretz is a wonderful Carrie and as far as modern actresses go, I wouldn’t have chosen anyone different. Sissy Spacek’s shoes were huge for this film and to even consider undertaking the iconic role is impressive. She sells the sadness and inner turmoil of a bullied teenager who is also abused at home. The only thing her performance is lacking is the crazy eyes that really only come from Sissy Spacek. Moretz delivers on basically every front and truly paid homage to the original.

The best performance of the movie, at least in my eyes, would be Jullianne Moore’s turn as Margaret White. While the original performance was haunting and disturbing, the inclusion of a few new character traits causes Moore’s performance to outmatch the classic. The opening scene of her almost killing the newborn Carrie is powerful and starts the film off with an immediate idea of who Margaret truly is. Later, we are also treated to Margaret’s constant self-flagellation as she continuously cuts and beats herself in punishment of sin. Moore’s Margaret is so much more terrifying than the original, which is impressive as the first performance was so memorable.

Overall, I would say that this film rivals the original in terms of quality. I think that Julliane Moore’s performance makes a great case for the remake being superior, were it not for Sissy Spacek in her career-defining role. For my money, I think the original film just edges out the remake.