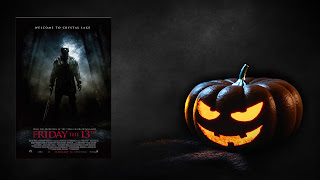 October can mean only one thing here at The DreamCage - it's time to count the days til Hallowe'en with David Ames' Hallow-vent Calendar of horror films! Day 20 is the remake of Friday the 13th ...


Read the review of the original Friday the 13th here.

Horror is a vast genre filled with many characters whose legacies extend multiple films and decades. Among those there are few who carry as much weight as Jason Voorhees, the Hockey mask wearing, machete sporting behemoth who haunts the forests and grounds of Camp Crystal Lake. By 2003 there were eleven Jason movies, all with their own particular positives and negatives. To continue the legacy of the character in 2009, a film was created by Marcus Nispel. Carrying the same famous name, 2009’s Friday the 13th is the film that we are going to talk about today.

If you are at all a fan of the franchise, you will immediately recognize some major points in the film. The writers and director chose, brilliantly if you ask me, to recreate elements from the first four movies, changing some slightly but even keeping some of their favorite kills. For Jason fans, the kills are one of the best parts of the film and have become as famous as the hulking monster himself. If you love the franchise, these homage moments will cause an undeniable smile.

The film begins by running through some origin elements in quick succession, showing Pamela Voorhees being decapitated, followed by the burlap sack wearing Jason killing counsellors, and ending with him discovering the famed hockey mask. At this point we are dropped into the story that will carry the movie.

Trent (A name has never been so fitting), Jenna (Trent’s girlfriend), Chelsea, Bree, Chewie, Nolan, and Lawrence all make a trip to Trent’s parents cabin on the shore of Crystal Lake. Filled with the normal joking and sexual tension found in slasher films, the beginning sets us up for the ride to come. When the group stops for snacks and gas, they run into Clay, a guy looking for his sister (who we saw interacting with Jason earlier in the film). Trent, being the stereotypical rich douche-bag mocks Clay while Jenna feels sympathy and takes a flyer. Through his investigation of the area, Clay is informed that there are no traces of Whitney and that, if she did disappear in the area, she is dead because HE wants It that way.

Canvasing door to door, Clay accidentally shows up at Trent’s cabin, only to be met with hostility and threats. Jenna leads him out and offers to aid in the search for Whitney. As they search, Jason begins doing what Jason does and Jenna’s friends are eliminated in a multitude of ways, some tying to previous films. When Clay and Jenna discover Jason dragging a body back to the camp they quickly go back to the cabin to warn the others and, as is normal in a Friday the 13th film, shenanigans and deaths abound. The very ending takes a turn that I was not prepared for but enjoyed immensely. I don’t want to ruin what happens for those who still haven’t had the pleasure of watching this film.

The performances are pretty solid across the board. Travis Van Winkle (Trent), Willa Ford (Chelsea), Julianna Guill (Bree), Aaron Yoo (Chewie), Ryan Hansen (Nolan), and Arlen Escarpeta (Lawrence) are all serviceable as classic horror movie archetypes (the jock, the stoner, the slut, the goof, etc.) and play their parts well. Standing out of that crowd is Yoo who is just as energetic and charismatic as every role he plays.

Jared Padalecki, only four years into Supernatural at this point, does a wonderful job as Clay. He is sympathetic and plays the guilty and shamed brother well. His character is not an archetype; he is a dynamic personality that exudes sex appeal and strength as well as emotional depth. Danielle Panabaker is great as Jenna. She is sweet and has a real girl-next-door appeal that works as she is the buttoned up, pure girl in the slasher film. Amanda Righetti does a great job as the tortured and confused Whitney but I can’t say much more about her performance without giving away plot points.

Lastly, and most importantly, was the decision to cast Derek Mears as Jason instead of Kane Hodder. I was skeptical of the decision because the hulking, muscular frame of Hodder is so recognizable as Jason. My worries were soon alleviated as I watched Mears deliver a very different, yet nearly equal version of the slasher. Mears isn’t as thick as Hodder but he is just as big and, because of his slightly smaller musculature, he is a faster and quicker killer—something we hadn’t yet seen in a Friday the 13th.

This film gets a lot of negative feedback and I understand some of the arguments about the plot being convoluted and some issues with the story but my real question is simple: since when did we really care about overall story in a Jason movie. Other than the first film, the series is basically Jason showing up and killing everyone. I looked at this movie through that lens and I loved it. I would highly recommend this film to anyone who simply enjoys Jason movies, or even just likes slasher movies in general. I can’t really say I liked it better than the original because it is an amalgam of multiple films, but I do truly enjoy the film and it is worth a watch!