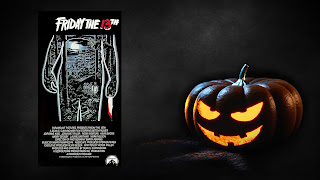 October can mean only one thing here at The DreamCage - it's time to count the days til Hallowe'en with David Ames' Hallow-vent Calendar of horror films! Day 6 is the 1980 classic, Friday the 13th (on Saturday 6th because we're rebels)...

A list of horror movie classics cannot count itself complete unless it includes certain films. The slasher genre especially has its own set of important films, all which spawned numerous, less than great, sequels. We’ve already covered Halloween and its iconic killer Michael Meyers and today, we move onto the second of the big three with Sean S. Cunningham’s epochal 1980s classic Friday the 13th.

Although this film doesn’t actually focus on the series’ important and ever-regenerating slasher Jason Voorhees, it sets the stage for him to become a household name. He appears briefly in the film and not in the way the iconography of this film franchise is known for.

The film begins with two camp counsellors sneaking off to have sex while the rest of the camp sleeps and the counsellors are enjoying a night by the fire. As they begin to get intimate, someone mysterious sneaks in and murders them both (it is shot POV style, similar to the opening of Halloween although we never see who the killer is. Early in the film, we meet Annie, the camp cook who gets a ride out to the camp, all the while being warned about the camp’s history by the local crazy man, Ralph, and even the truck driver who gives her the lift. He tells her about the history of Camp Crystal Lake, known by the locals as “Camp Blood,” and informs her that years back a young boy drowned and then the next year, two counsellors were murdered. She ignores his warning and after being dropped off, makes her way on foot to the camp, although she never makes it.

Friday the 13th then follows the archetype of the classic slasher film: a bunch of sexed up but otherwise friendly teenagers and young adults in their early 20s head to an out of commission summer camp, the one from the beginning of the film, to fix it up and then subsequently work as counsellors when the camp opens. They all arrive in small numbers, meet, and begin working hard to make the cabin hospitable, dealing with everything from terrible electricity to drooping gutters to snakes. As they are working, Ralph shows up and warns the kids that the camp is cursed and that they are doomed… DOOMED!

From here, the film follows the classic slasher tale: kids begin to disappear, each one being murdered in unique ways until there is only one left. The final girl, Alice, of course finds all of her friends and then is confronted by the killer of the movie but it is not who we think it is. I won’t give it away, just in case someone out there hasn’t seen this movie.

All of the performances are standard 80s slasher movie fare except one: Betsy Palmer as Mrs. Voorhees. Her performance is scary and captivating and while the “fight” scenes are less than impressive; it is really her quietly whispering to herself in the voice of her dead son that causes the creep factor rise. Her crazy eyes really have an effect in the scenes when she appears.

Lastly, one of the iconic elements of the film is the classic CH CH CH CH CH, AH AH AH AH noise that happens every time we are given a glimpse of the killer stalking their victims. This has become almost as recognizable as the burlap sack, the hockey mask, or the machete. Pop in this classic and sit back to enjoy another piece of pop culture history. This film, and of course the famous ending, are something that should be enjoyed as one of horror fandom does: we look for the good and ignore the blatantly bad while embracing whatever is in front of us. This movie may not be perfect but it is a perfect slasher film and I love it all the more every time I watch it.