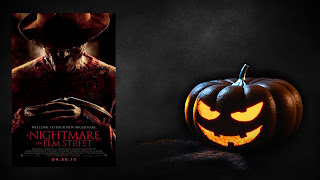 October can mean only one thing here at The DreamCage - it's time to count the days til Hallowe'en with David Ames' Hallow-vent Calendar of horror films! Day 29 is a look back at the 2010 remake of A Nightmare on Elm Street ...


Read the review of the original Nightmare on Elm Street here.

Hollywood can be a strange place—they give us brilliance and beauty and depth, but sometimes they instead give us crippling disappointment (DC Universe except Wonder Woman). It seems that the executives in charge of film studios continuously try to repackage the same story and the same movie instead of looking for something new or original. When these decisions are made, we as the audience are treated to unnecessary remakes that no one asks for or really even wants – looking at you Wicker Man, Teenage Mutant Ninja Turtles, Ghostbusters, The Karate Kid, etc. Today we look at one of these movies. On paper, it has serious promise and the casting is pretty stellar but some serious writing and directorial choices have bastardized the source material instead of utilizing it. Today we discuss Samuel Bayer’s 2010 remake of A Nightmare on Elm Street.

The film opens when Kris Fowles is going to the Springwood Diner to meet her friend Dean. He looks terrible and falls asleep at the table. In his dream he is chased by a horribly burned man with a glove covered in knives. Dean, still asleep, grabs a knife from the table and slits his own throat, leaving Kris scarred and disturbed, and the waitress, Nancy, also shocked at the situation. At the funeral Kris discovers that she knew Dean as a young girl but can’t recall anything from that time. As the days pass Kris begins to also dream of the burned man, Freddy Krueger, and when she is struggling to hold it together, her boyfriend, Jesse, shows up to keep her company. Kris is murdered in her sleep and Jesse is looked at as the prime suspect.

When he is apprehended, Jesse understands what has happened and tries to avoid sleep. He is unsuccessful and Freddy kills him. Meanwhile, Nancy is also suffering from similar dreams. Nancy, normally a shy and withdrawn girl, begins to wonder about the connection between all of these deaths as none of the kids seem to remember knowing each other before high school. She and her friend, Quentin, begin to ask questions and eventually discover that they all went to the same preschool where Krueger was a maintenance man. He would abuse the kids, especially Nancy, but her mother tells her that Krueger fled town before anything could be done. Nancy discovers most of the other children from the preschool have been killed in similar fashion to her friends.

Quentin tries to look past the nightmares but cannot, eventually dreaming about what really happened to Krueger: the parents of Springwood tracked him down and burned him alive. Nancy falls asleep and is attacked but is woken up and discovers that she can pull part of Krueger out of her dream. They formulate a plan to pull him out of the dream and kill him once and for all. The plan, while flawed ends up working and Nancy slices off Kruger’s gloved hand as well as cutting his throat before burning him again. The film ends as Nancy and her mother return home and Krueger appears, killing Nancy’s mother and pulling her into a mirror.

So, I know that I have given you the entire plot but you needed to see how convoluted the entire situation ended up being. The writers, while providing some good filler, have crafted a film that requires so much information to understand fully. They overloaded the film with backstory that wasn’t really necessary. On top of that, they used an iconic pop culture character and took away one of his most recognizable traits—they stole his humor. While Freddy is indeed scary in the original, he has a humor and wit that adds to his personality, making him more terrifying as he plays with his victims. Instead, in the remake, Freddy is straight darkness and the wit is completely absent.

Another poor aspect of the film is the use of CGI for really no reason. While the film crew did try to achieve a much more realistic look with Freddy’s burn scars, they overlaid CGI elements which did not look stellar. His face looked less scary and more ridiculous. Also, can I just ask WHY?!? when referring to the famed face in the wall. The original was all practical and it looked amazing. When they recreated it with CGI, it looks hoaky and awful.

Performance-wise, I think the cast is actually pretty great. Katie Cassidy is spot on as the terrified Kris and Kellan Lutz, in a very small but great portrayal, plays Dean with a fear and intensity needed for the opening scene. Kyle Gallner plays his usual, alternative kid who doesn’t quite fit in (Jennifer’s Body, The Haunting in Connecticut, Beautiful Creatures) but that works very well for the role and he is one of the stronger performances in the film. Lastly, Rooney Mara is a great Nancy. While I don’t like the changes to her character from the writing perspective, Mara puts forth a worthy addition to any list of final girls. She is scared and weak but eventually assumes a positon of power and strikes back at her attacker.

Replacing Robert Englund was a nigh impossible task as anyone who is a fan of Freddy will tell you. Englund is the face of the franchise and so a choice to scrap him from the film seems like terrible foresight. That being said, I am genuinely a fan of Jackie Earle Haley and I actually like what he was doing with the role. I am not at all a fan of the writing choices that altered his character’s personality but I think he was great at what he was going for and if they would have kept the more iconic elements of the character, I know that Haley would have crushed those. Overall, I have no complaints about the cast as a whole.

The film is paced very strangely in that we spend a lot of time with Kris. In fact, each time I watch this, and it may just be that her scenes are better than the rest of the movie, it seems like we are with her for at least half the film. Then, Nancy takes over but we haven’t had a chance to really connect with her so the end of the film falls very flat.

One major plus to this film is the opening scene. In the diner, we are treated to easily the best part of the film. Lutz and Cassidy are great and Mara’s reaction to the whole thing sells. Also, watching Lutz cut his own throat was incredibly effective and gave me hope which the rest of the film couldn’t fulfill. A Nightmare on Elm Street is such an iconic film and to bastardize such a well-loved and revered film should be a crime. The remake had potential but fell flat in nearly every capacity. It is worth a watch if only for that opening scene, but make sure you go in with your eyes open.