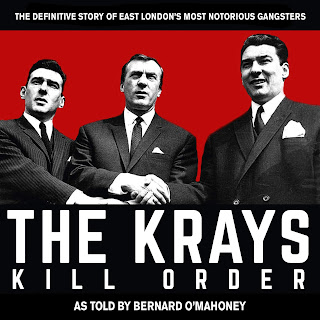 Coming to Audible from 14th December, The Defective Inspector investigates the audiobook of The Krays: Kill Order by Bernard O'Mahoney...

Being the Defective Inspector, I feel somewhat “in the role” to listen back to stories about the infamous Kray Twins. The questionable activities, the stigma of sexuality, the mental instability, there is so much to talk about when discussing the Kray twins. It doesn’t matter what your opinion is on the Krays, they were undisputedly a complicated bunch. Recent reminders of this escapades invoked books, movies and radio programs galore so it’s hard to imagine what more there is to tell. One thing that is clear; most productions look at the Krays sympathetically, but this production does not. This audiobook rips open the ribcage of the Krays' closet skeleton without remorse.

This item is sold as an audiobook but to be more accurate it’s a TV documentary shifted to the radio. That’s not a bad thing, the interviews between the various Kray affiliates supports the narrative so strongly that it doesn’t feel like anything less than a BBC-esque production. Ambient background music that complimented the situation, well balanced sound mixing and good pacing were all classic signs of a professional and refined production. My only gripe is I occasionally I got lost working out who was who. Truthfully, I wasn’t really worried about that. The audiobook is about the Krays and not the family members themselves.

While the stories told by Frankie Fraser or Eddie Richardson are not surprising, they are can be remarkable. When they talk about how this fight or that threat transpired you are not surprised it occurred, it’s an audiobook about the bloody Krays, but the way everything is told matter of fact is engrossing. For God’s sake you hear a tap of the spoon on the ceramic cup during some conversations, like bloody murder is something you’d chat about with your Nan over a cup of Earl Grey.

As professional as the production is, one big mistake is clear; Bernard O’Mahoney as narrator. It’s a bad idea to bad mouth a former soldier in/famously from Danny Dyer’s Deadliest Men but he truly isn’t an orator. I don’t hear the passion or intrigue I’d expect from a professional voice actor. He’s not a big part of the audiobook so it doesn’t change the pace all that much but I suspect he was picked for his reputation, not his skills. In the end of the day it doesn’t detract away from the Krays but I am not sure anything could.

But let’s be blunt for a moment, as this audiobook is a true crime documentary, the best way to judge it’s worth is to ask; did I learn anything new or interesting about the Krays? Honestly yes, I wouldn’t call myself an expert but the interviews with people who were not working class, like Toby Von Judge, really opened up the story a bit better. There is nothing unusual about the Kray twins interacting with a collection of EastEnders for less than legal reasons, but those little interactions outside of that bubble, that interested me immediately.

I don’t want to dive too deep, the joy of an audiobook is listening to it and not reading about it. The Krays: Kill Order is story of two boys who became infamous men and later a broken family. There are dusted details throughout the 90-minute saga as told by friends, family and rivals. If you are new to the Krays or a bit of a detective, it doesn’t matter, there is plenty of Kray to go around.

Image - One Media iP
Email ThisBlogThis!Share to TwitterShare to Facebook