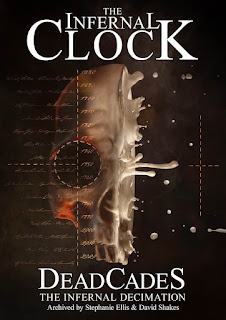 There’s nothing better than a good horror story to read as you huddle by a roaring fire with a dram on a dark and stormy night. Okay, okay, “as you huddle by the radiator that isn’t on because it’s quite mild out really and only a bit drizzly this afternoon but, still, there's coffee” but that spoils the effect. Anyway. Ahem. There’s nothing better than a good horror story etc etc… only there is something better. You could have a book with 15 excellent short stories, covering 15 decades. Yes, DECADES of writing because DeadCades (nice pun by the way) is the next book in the wonderful Infernal Clock series of horror-themed short story anthologies put together, or "archived" as the cover would have you believe, by David Shakes and Stephanie Ellis. (See my previous reviews of The Infernal Clock, which had a story for every hour in the day, and Calendark, which had a story for all the different festival days in a year.)

Before I get on to the content, though, I want to mention the layout of the book. Whereas, in previous books in the series, there was a relevant literary quote to head up each chapter, this time we are treated to a list of chilling real-life historical events, one for each year, (big props to whoever in the team had to put these together, what a MAMMOTH research task but brilliantly done) as well as a “drabble” for each decade. A drabble is a 100 word short story, written by different authors to the longer tales, and it seems like they were cleverly picked to connect in some way with the longer story for that decade so it really felt like I was at the cinema in a book, with adverts and a short before each main feature. This is not a criticism by the way, because all the stories are very visual as well as atmospheric and the grouping for each decade does feel cinematic, so it works very well.

Although there were some individual stories that didn’t work quite so well for me, but that is purely personal taste rather than a lack of quality, there was also much to enjoy in DeadCades. That’s the great thing about the Infernal anthologies as genre collections - from monster horror to body horror, psycho kinesis to pserial killer, there is something for every style of horror fan. There is also a fantastic mix of known names and new contributors – as a personal aside, it was great to see the venerable Marc Nash with a drabble entry this time as I always enjoy his work, but it’s also a wonderful way to discover fresh names to look for. Each story also sat very well within its assigned decade, from the stagecoaches of Deborah Sheldon’s 1880’s tale to the electronica of the very-near future with the 2020’s story from A J Walker, nothing felt out of place or that it had an era shoe-horned into it, everything felt natural which is impressive.

As always it is difficult to pick favourites in these anthologies. Looking back over all the stories, it seems that I enjoyed the later drabbles more than the earlier ones but the earlier longer stories more than the later ones but everyone's pick will be different. My favourite of the long stories though has to be Martin Fuller’s spooky tale of The Daguerreotypes of Dr Nathanial Samuels which had a fascinating concept and made excellent use of the popular culture of the era, as well as using a distinctive style of diary entries to tell a “proper” late-Victorian ghost story. I loved it. However enjoyable it was, though, that story was not the most memorable – being a horror anthology there are characters that creep you out so much that they stick in your memory long after the book is finished and Alyson Faye’s Mr Dandy gets that accolade this time out. Still shuddering.

If you love horror, then you need to read DeadCades, you will definitely find at least one story to satisfy you. In fact, even if you think you don’t love horror, give this, and the other books in the Infernal series, a try anyway; it’s a superb taster for a vast genre and will let you try lots of different styles in one place. Horror is like gin, you see – if you think you don’t like it, it’s just because you haven’t found the right one yet.