Doctor Who - Mummy on the Orient Express 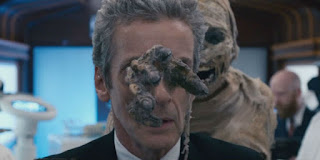 Our Doctor Who expert, Tony Cross, is journeying through all of time and space to bring us his thoughts on every available Doctor Episode. Today is the Twelfth Doctor adventure Mummy on the Orient Express...

After a bit of a two-story blip we arrive at a rather fine little story in Mummy on the Orient Express. Clara is still - unfairly - upset at the Doctor after the events of Kill the Moon and this trip is supposed to be a final hurrah for their relationship. although I was never entirely convinced that this is what was going to happen.

They arrive, both dressed rather beautifully, on the Orient Express...IN SPACE. Clara looks amazing in what looks to me - a fashion expert obviously - an art deco influenced 1920s dress. Meanwhile, the Doctor seems to have dug his suit out from The Gunfighters. They look great together and separately. Initially, this story looked like it might get a bit hung up on the relationship stuff, but it shook that off darn quickly when a killer Mummy - known as the Foretold - pops up and starts murdering people in a very time specific 66 seconds.

There's a mystery to solve and friendship issues or not the Doctor is going to solve it. Capaldi is majestic in this: sweet, arrogant, sad, angry and clever. Often at the same time. His focus on solving this mystery to the extent that he is trying to get information out of people as they are dying annoys Clara. Again.

She almost loses her temper with the Doctor when he seems to make her an accomplice to the impending death of the rather confused and upset Maisie (Daisy Beaumont) but the Doctor has a plan. Of course. The thing is, with Capaldi's Doctor, his focus on saving people is broader than trying to save everyone. The Twelfth Doctor knows he needs information to stop the Foretold and that information is only going to come as and when the Foretold pops up to kill another person. What he's trying to do is make sure that the number of people that must die before he has the answers is minimal. It's a terrible thing to have to do but it is the only way to win. As the Doctor himself says, 'Sometimes the only choices you have are bad ones, but you still have to make a choice.' The Twelfth Doctor isn't heartless but he can be ruthless.

There's a lot of fine actors in this story in small parts: David Bamber as Captain Quell who gets a small character arc of his own; Christopher Villiers as Professor Morehouse; John Sessions as the voice of Gus and it is nice to see Janet Henfrey make a New Doctor Who appearance (even if it is a short one) after her appearance in The Curse of Fenric. Oh, I forgot that Villiers made an appearance in Classic Doctor Who himself in The King's Demons

I think my favourite performance though is Frank Skinner as Perkins, the Chief Engineer. Skinner is, I have discovered something of a massive Doctor Who geek. I was a bit concerned because I wasn't sure Skinner could act but he does an excellent job with Perkins who is cool, calm and collected most of the time. Indeed, the Doctor likes him enough to offer him a role about the TARDIS, which Perkins turns down. Perkins has seen enough, from this one story, of how the Doctor's lifestyle can 'change a man.' But I'd be happy to see more of Perkins at some future point.

There's some fine writing here from Jamie Mathieson, but I think the almost final scene of the story when the Doctor and Clara talk about why she is asleep on a beach is brilliant. It pokes at the issues Clara's been having with the Doctor and the Doctor refuses to make it easy for her. It's well-played by both Jenna Coleman and Peter Capaldi. As is the final scene in the TARDIS where Clara seems to have decided that she was just suffering from a 'wobble'.

The discussion about whether what the Doctor does - making life or death decisions - is an addiction is lovely writing. Then Clara's call with Danny and her decision to 'stay' with the Doctor is done beautifully. I can't be the only one that thinks Clara's 'I love you' to Danny is aimed at the Doctor. Or perhaps I am.

Oh, and I applaud Capaldi's conversation with himself (as the Fourth Doctor) and the jelly babies in the cigarette holder. Both of which were nice little nods without being unnecessary fanwank.

So, all in all, this was a rather lovely story. And as a result, I'm struggling to find something interesting to say. It is so much easier to write about stuff you didn't like because you can get your teeth into the bits that irritated you and shake them about. But when it is good stuff it is much harder, especially consistently good stuff.

I mean what more can I say about the chemistry between Capaldi and Coleman or the brilliance of their acting when so much can be conveyed in a smile or a look - such as the joyful grin The Doctor gives when he realises Clara's serious about getting back out there in amongst the universe. It's a joy to watch.

I had a bad night last night. A night of self-doubt and - I suppose - fear. It wasn't good, but it is amazing the effect some good Doctor Who can have on my spirits. Perhaps I shouldn't be so emotional dependant on a television series for which I am no longer the target market. Perhaps I should be just a little bit more grown-up. But sometimes being a grown-up is hard work. Sometimes it is lonely and difficult. Sometimes you don't want to be grown-up for a little bit. You just want to put all your fears and worries to the back of your tired brain and have some fun. That was how I felt after I'd watched Mummy on the Orient Express and you can't ask much more than that from forty-five minutes of television.