Doctor Who - Kill the Moon 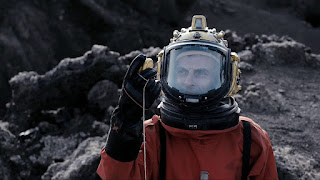 Our Doctor Who expert, Tony Cross, is journeying through all of time and space to bring us his thoughts on every available Doctor Episode. Today is the Twelfth Doctor adventure Kill the Moon...

Before I start let me say that this article contains spoilers because, frankly, I haven't got the energy to hide them. They start from the next paragraph so if you haven't watched Kill the Moon before you should go and do so now. I'll wait.

Ah, Kill the Moon with its Moon as an egg thing. Not just an egg. An egg that will hatch and automatically lay an exact replica of itself immediately afterwards. An egg from which gigantic baby soup dragon creature will emerge and fly off into deep space. The Moon is an egg. Now, from this paragraph, you might think that I didn't like this story, but you'd be almost wrong. On my first watch, I will admit to finding the whole scenario Heffalumping ridiculous. And it is.

But then you start to think. Is it any more ridiculous than a blue box that travels through space and time? A box that is bigger on the inside than it is on the outside. Whose pilot is an alien aristocrat with a penchant for saving the universe and the ability to change from one body to another through a process known as regeneration? Well, yes. Yes, it is. But that choice is only my own. I have drawn a line in the sand where perfectly sensible storytelling begins, and utter nonsense takes over.

Now. mine wasn't even the Moon is an egg. That was close to the line, but not over it. No. It was the identical new egg that replaced it so that the Earth didn't come to a wobbly end that crossed the line. THAT was ridiculous. Not the egg itself.

At that point, I just decided that I should ignore the whole thing and just enjoy the rest of the story. About which there is much to be positive. The acting is superb. Hermione Norris as Lundvik is another fantastic actor in a long New Doctor Who line who plays a small part that just demonstrates that she's worthy of so much more. It's lovely to see Tony Osoba as Duke again. Last seen as Kracauer in the Seventh Doctor story Dragonfire he's a familiar and consistently good television face. So, obviously, he's going to die. Plus, Ellis George does Courtney again and manages to avoid irritating me for the second story running, which is some achievement based on my low tolerance for child actors.

But the real glory in this story is Capaldi/Coleman. There's some genuinely brilliant stuff from both but Clara's genuine rage at the Doctor after he leaves her, Courtney and Lundvik to decide whether to kill the creature inside the egg or let it hatch. (And here can I pause for a moment to applaud the ridiculousness within the egg ridiculousness of broadcasting a message to the whole world from the Moon and getting people to pay attention.) The Doctor's intentions seem good but bizarre. The Doctor's never worried about making decisions on behalf of humanity before so why the sudden desire to leave everything up to us now?

Sorry, I've digressed. That Clara/Doctor seen where she rages at him and he tries to understand why she's angry but can't seem to grasp it. It feels like a piece of genuine emotion. Two fine actors giving it their best. It's astonishingly good. And it makes up for a lot.

Did I like Kill the Moon? Mostly. To do so I had to ignore the bit of my brain that found this story to be so packed with ridiculousness that it might as well be Donald Trump. Then that ridiculousness isn't necessarily a bad thing. There are ridiculous stories dotted throughout Doctor Who. I like most of them. So, I liked it. And didn't.

What it is worth watching for isn't the plot though. It's worth watching for the performances. It's worth watching for that final scene, although once more Clara threatens the Doctor with violence. And even though it is a good scene you do find yourself thinking that Clara is being utterly unfair to the Doctor. Perhaps because she's got Danny's words in her head from The Caretaker she resents being pushed too far, too soon but she's angry because she's been asked to do what she expects the Doctor to do ALL THE BLOODY TIME. She's angry because the Doctor won't make a life or death decision for once. For whatever reason. And that seems unfair and childish.

Even if it is played superbly by both actors.

So, yeah that was Kill the Moon that was. Make of it what you will.