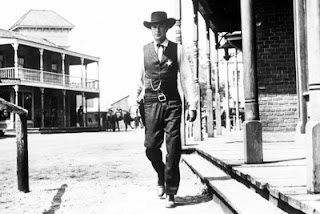 No, this isn't one of the bossman's imaginary What If recastings, it's official. Filmmaker David L. Hunt and producer Thomas Olaimey have closed a deal with Karen S. Kramer, wife of the late producer, Stanley Kramer, for a remake of his classic film, High Noon.

Hunt, who directed and co-wrote the American College Football film Greater in 2016, will write a new screenplay and direct the remake of the Western, which is planned for a late 2019 release.

Writer-director Hunt said "High Noon is legendary - the small, thoughtful Western with big ideas that went on to become one of the most iconic motion pictures of all time. It is an honour to be given the opportunity to bring the depth and power of the original to our own cultural moment."

Producer Olaimey added "We will all, at one time or another, have our High Noon moment in life. Being able to produce a remake of this classic Western with this type of brand equity on a worldwide scale makes it all worth it."

The plot of the original film, depicted in real time, centres around a town marshal, Will Kane, who, at 10:30 am on his wedding day is set to leave town with his new Quaker wife and turns in his star to the townsfolk even though the new marshall hasn't arrived yet. Then he hears that an outlaw gang, whose leader he sent to prison years ago, is heading into town exact their revenge on him. With the townsfolk unwilling to help and his pacifist wife begging him to run, Kane has to decide whether to face the killer gang alone at high noon. It was contentious in its day, at the height of the Cold War, being lauded by the Left as an allegory against McCarthyism and being vilified by Russia as a "celebration of the individual" because our hero goes against the will of the people.

Mrs. Karen S. Kramer said of the deal "I congratulate Thomas and David for their enthusiasm and passion for remaking this classic film about a man who stood for justice, when standing for justice was most difficult. Its theme is the hallmark of many Stanley Kramer films and comes at a time when such a message is needed more than ever."


This isn't the first time that a remake has been tried. In 2002, there was a "straight to video" remake directed by prolific TV director Rod Hardy with Tom Skerritt in the lead role and, even further back, they tried a SEQUEL to the original film in 1980, High Noon II The Return of Will Kane, written by Elmore Leonard and starring Lee Majors and David Carradine! How could that have failed?!

So I guess the question is, now that they know they CAN try it again, SHOULD they? And who is now worthy of taking on the roles made famous by Gary Cooper, Grace Kelly, Lee Van Cleef et al. Time will tell.