Book - Star Trek Prometheus: In the Heart of Chaos 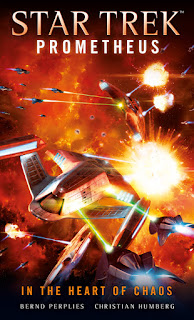 Boldly going where two books have gone before, Titan Books announce the publication later this month of the third book in the Star Trek Prometheus trilogy, In the Heart of Chaos by Bernd Perplies and Christian Humberg...

The final instalment in the Star Trek Prometheus trilogy, which began with Fire with Fire [Read Paul's review of that here] and continued in The Root of all Rage, and takes place in a post-Nemesis timeline. Rejoin the U.S.S Prometheus crew as they try to stop war breaking out in the galaxy.

The situation in the Lembatta Cluster is deteriorating rapidly. Fleets from the Federation and Klingon Empire are heading for the borders. The crews of the U.S.S. Prometheus and I.K.S. Bortas are racing against time to break the cycle of violence that is spreading through the Alpha Quadrant. Adams and Kromm are on the trail of a secret weapons facility, but instead discover an enemy from their pasts who seems utterly unstoppable. Together, they search for the answers to their questions, before the galaxy goes down in flames.

Bernd Perplies is a journalist, writer and translator who lives near Stuttgart, Germany. He currently works at the German Film Institute in Frankfurt and made his debut with the well-received ‘Tarean’ Trilogy.

Christian Humberg is a freelance author who has written for series including Star Trek and Doctor Who. His works have so far been translated into five languages and have won German-language prizes.

Star Trek Prometheus: In the Heart of Chaos is published on 27th November