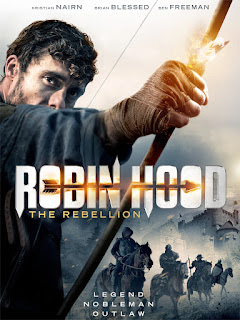 I have a love/hate relationship with Robin Hood. I was spoiled by such great television when I was younger and to this day still hold Robin of Sherwood, both Praed and Connery, in the highest of regard but, when it comes to the big screen, nobody has yet matched the Disney animated classic, not even Prince of Thieves which in all honestly was an expensive Hollywood production of an amateur play complete with a wasted Alan Rickman playing pantomime villain. There was another big budget production a few years ago, I vaguely remember Russell Crowe was in it, but it was hardly a memorable endeavour, and the trailer for this year’s attempt starring Taron Egerton looks... Well, bloody awful. Maybe the lower budget, more independent version may hold something akin to the quality of the television series? Eh, no.

It's not often that I truly hate something, I don’t think I’ve ever recommended that someone doesn’t watch something just because I haven’t enjoyed it, I am smart enough to know that our tastes as film fans differ, but I cannot in good conscience suggest giving Robin Hood: The Rebellion any of your time and money. It is woefully cast, Ben Freeman who plays Robin is apparently well known to some of you as a star of soap opera Emmerdale and the soap training is etched into his hammy performance. He has gone for gritty Robin, a blood thirsty outlaw out to show the Sheriff of Nottingham what’s what but he comes across as whiny and massively out of his depth. This is some achievement considering how bad everybody except Brian Blessed is in this film, and even Blessed is completely wasted talent-wise. Even if the cast could act, and from this film I have my doubts that any of them actually can, they have nothing to work with. The script is almost plotless and the dialogue so stilted that I honestly think any actor would struggle. This is only made worse by an incredibly slow pace to proceedings and some of the clunkiest and unconvincing fight work I’ve ever seen on film. Some of the sword fighting, which is too over reliant on slow motion to work, is reminiscent of a school production.

There is nothing good about Robin Hood: The Rebellion except the score which is edgy and striking and so deserving of being in another project, any project. I don’t like to rip apart films, it's not fair on the people that make them who, most of the time, have done their best. However I feel a duty to counteract some of the positive press I have seen for this project which I can only imagine has either been paid for or was written by director Nicholas Winter’s family. My search for a big screen Robin Hood film that works continues.

If you really must see it: