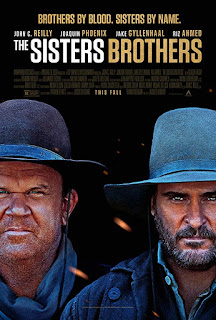 Ren Zelen finds the fun in sibling rivalry as she watched The Sisters Brothers...

For his English-language feature debut, French director Jacques Audiard has taken on a thoroughly American genre, the Western. The Sisters Brothers has been adapted by Audiard and long-time co-writer Thomas Bidegain from the Booker-shortlisted novel by Patrick DeWitt and stars John C Reilly as Eli Sisters and Joaquin Phoenix as Charlie Sisters.

The Sisters Brothers are two guns-for-hire in 1850s Oregon at the height of the Gold Rush. They are bounty hunters, wranglers, assassins – they do whatever shady work is necessary for a rich, ruthless businessman and crime-lord known as ‘the Commodore’ (Rutger Hauer).

Their latest task is to obtain certain valuable information from chemist and inventor, Hermann Kermit Warm (Riz Ahmed), by whatever means necessary. However, the Commodore has enlisted the help of a genteel but efficient private detective, John Morris (Jake Gyllenhaal) to go ahead of the brothers in order to track down their victim, who has gone on the run.

John Morris travels a few days’ ride ahead of the brothers and sends frequent dispatches outlining his progress. Charlie Sister finds the formal, educated style of Morris’s letters rather irritating, annoyed at being told where to go and what to do by what he imagines to be an overly pretentious gentleman.

The brothers know better than to question their orders from the Commodore - as far as they’re concerned, Warm is a thieving enemy who has betrayed their boss. However, when John Morris finally meets and befriends Hermann Warm, he finds a man of quick mind who is humane and decent.

It is then that the two pairs of men set out on somewhat different paths, and we start to realise that the underlying drama of The Sisters Brothers lies in how these four very distinct characters might arrive at loggerheads with each other, or possibly find common ground.

When the men learn that the Commodore is in pursuit of Warm because he covets a chemical formula that he has discovered, and the useful nature of this formula is revealed, the prospect of potential wealth makes the brothers quickly readjust their priorities. However, the Commodore does not take kindly to being thwarted, and it isn’t long before Eli and Charlie find that he has sent a posse out to track them down too.

The Sisters Brothers suggests that there are two kinds of men in the world of this Western - those who embrace the need for civilizing elements (such as toothbrushes) and those who still believe that alcohol and self-indulgence is the answer to all ills. In opposition to Gyllenhaal’s urbane, educated Morris and the progressive scientific humanism of Ahmed’s Warm, is Phoenix’s Charlie Sisters – a brutal, trigger-happy throwback to the lawless West – who has drunken gunfights and is keen to cultivate a reputation for violence.

Somewhere between both camps is Reilly’s Eli, still haunted by memories of the brothers’ abusive father and who is tiring of a life of brutality and lovelessness. Eli is beginning to yearn after something more stable and satisfying, symbolized by his wonder in discovering toothpaste and the concept of dental hygiene, which he then willingly adopts.

It is a film about a cat-and-mouse chase infused with violence and body horror – but it is also a bittersweet examination of family ties and unexpected alliances. Each of the characters is sensitively outlined and beautifully played. Gyllenhaal imbues the cultured, scholarly Morris with a thoughtful melancholy, while the Ahmed plays Warm in a way which exemplifies his name.

The Sisters Brothers owes much of its appeal to the charm and comic-timing of character actor John C. Reilly. Reilly and Phoenix exhibit a testy but loyal chemistry throughout – their lifelong fraternal bond punctuated by spite which has its origins in their divergent aspirations, and which becomes clearer once we know something of their back-story. As the action unfolds and the story takes some unexpected twists, we find that the four main characters come together in ways we could never have foreseen.

The Sisters Brothers is a refreshingly original yet knowing homage to the Western genre. Audiard (A Prophet, 2009, Rust and Bone, 2012) takes familiar elements - shootouts, grubby saloons, liquor-soaked outlaws, ruthless bullies and, with his characteristically sensitive touch, reinvents them in witty but also in moving and tragic ways – taking time to examine the hopes, dreams and failings of his distinctive central characters.