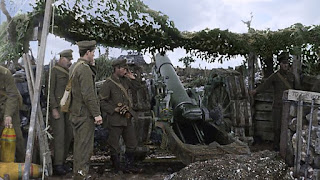 They Shall Not Grow Old will be available on BBC iPlayer after its broadcast on BBC Two on Sunday 11 November at 9.30pm. Co-commissioned by 14-18 NOW, the UK’s arts programme for the First World War centenary, and Imperial War Museums, in association with the BBC, the film has been created exclusively with original footage from Imperial War Museums’ film archive and audio from BBC archives.

They Shall Not Grow Old uses the voices of the veterans combined with original archival footage to bring to life the reality of war on the front line for a whole new generation. Footage has been colourised, converted to 3D and transformed with modern production techniques to present never before seen detail.

Other programmes available include We Will Remember Them with Huw Edwards, in which Huw embarks on an emotional and explorative journey of remembrance. Travelling from Wales to the western front, Huw reveals the untold story behind the unique way in which Britain and the empire honour their fallen soldiers who sacrificed their lives in the fight for freedom.

Also on BBC iPlayer is 100 Days to Victory, a two-part series charting how the Allies won, and Kate Adie’s Women of World War One, in which distinguished war reporter Kate Adie examines the impact of women's work on the Home Front during the First World War.

They Shall Not Grow Old will be broadcast on BBC Two on Sunday 11 November at 9.30pm. In this BFI interview, Jackson, whose grandfather fought in WW1, talks about the responsibilities inherent in making a war documentary and why today's teenagers should be given an accurate portrayal of war.


The following programmes will all be available to watch on BBC iPlayer from Sunday 11th November.