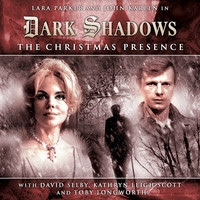 Susan Omand dons a paper hat  and dives headlong into some Christmas spirits.... er... spirit. A reminder of her thoughts on a festive Dark Shadows full cast audio drama, The Christmas Presence from Big Finish...

Christmas is just around the corner and a young boy is being tucked into bed by his grandmother. As she leaves, a man appears whom the child believes to be Santa. Playing along, the man asks what the boy wants, which is a trip inside Collinwood but the man says it doesn’t exist. Scared by the man, the child wants to know who he really is and screams when he finds out.

Meanwhile it’s Christmas Eve in Collinwood and Quentin Collins has issued an invitation to all his family and friends to join him for Christmas. Willie Loomis arrives in a snowstorm with firewood as Angelique decorates the Christmas tree, wondering about the “magical” quality of it, and Quentin tells them that another child has disappeared from the village, making five in total. Angelique torments Willie over the missing children and says that he will be seen as the prime suspect. Quentin goes to the kitchen and hears singing from outside but Maggie Evans, who is staying at Collinwood for Christmas and is busy preparing for the meal, hears nothing. Likewise Angelique hears a child’s voice, but Willie hears nothing – believing she is tormenting him further. The child is not alone though and Angelique can sense a presence outside. Barnabas Collins comes in, who saw nothing, and dismisses it as another of Angelique’s games. Barnabas heads to the kitchen and gives Maggie a turkey for the Christmas feast. Returning to Angelique, he scolds her for tormenting Willie but she tries to get back in his good books by transporting them both to a peaceful wintery realm where he, as a vampire, can walk in the daylight. But she hears the child’s voice again and, at that moment, Barnabas disappears and is returned to Collinwood, back with Quentin. Unexpectedly, there is a knock at the door – it is the strange man.

Who is the man? Where are the voices coming from? And what is Angelique up to?

It’s refreshing to have a Christmas-set story that’s not a complete rewrite of either A Christmas Carol or the Krampus, although there are elements of both in The Christmas Presence with The Man who visits the child and with Quentin Collins’ vision of a future event. In fact, you could take the festive aspect away from this story and it would still work very well as a ghostly tale as it also furthered the overall Collinsport story arcs rather than being a completely stand-alone episode. Everyone that knows me realises that I am not the most child-friendly individual but I really think it worked for the plot to have children as the central theme this time. The focus being on the young boy’s relationship with his grandmother and The Man at the start, along with the mention of another child going missing, all help build the expectation for when the voices start to appear. The one thing that really didn’t work for me in the writing though (and it’s only a small thing) is the superfluous turkey attack but I’ll say no more about it and let you find out for yourselves.

The acting from everyone was really good, as ever, and the characters stayed very true to form, with Angelique (Lara Parker) stirring the pot in a deliciously vindictive way as usual. Thomas Grant as the Boy was particularly impressive, managing to act and sound natural rather than “stage directed” if you know what I mean; he came across well because he didn’t try too hard to “act the part” as child actors so often do. The sound design and use of background music also really helped to increase the level of tension in a highly suspenseful story and the chanting behind the young child’s voice was especially unsettling. As a ghost story, this episode hit all the marks as an unnerving tale and, as a Christmas drama, this is definitely one to get you into the festive spirit in all senses of the word.

The Christmas Presence is available from Big Finish.