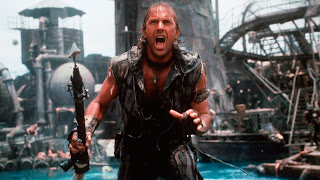 If you'll notice the arterial nature of the blood coming from the hole in my head, you can assume that we're all having a real lousy day.

In the future, the Earth is engulfed with water when the polar ice caps melted, leaving the lands and civilization beneath the sea. In "Waterworld" drifters sail across the waters of the world on their man-made ships, trading for supplies and salvaging what is left of civilization, communities of survivors live in towns called "Atolls", and a force of evil pirates "The Smokers" travel across Waterworld in search of a mythical island called "Dryland". Arriving at an Atoll, a mysterious drifter known only as the Mariner is sentenced to death when the community discovers he is a mutant. When the Atoll is attacked by The Smokers led by their evil leader Deacon, a woman named Helen and her adopted daughter Enola bribe The Mariner to take them to Dryland, believing The Mariner has been there. But the Mariner, Helen and Enola are pursued by Deacon and the Smokers, when The Mariner learns the tattoo on Enola's back is, in reality, a map that will lead them to Dryland...

I was twenty years old when Waterworld came out. I remember the controversies over the budget, I recall the press detailing supposed fall outs between Kevin Costner and just about everybody else, and I am plainly aware that many didn’t bother with Waterworld due to the critics piling onto the anti-Costner bandwagon. Well shame on you, you don’t deserve a Filmmaker like Kevin Costner. Because that is the point in films like Waterworld, in Dances with Wolves, in The Postman, they are proper films made by a passionate man who quite literally puts his money where his mouth is, and you all pile on with derision but then bemoan the lack of great storytelling in your cinemas. Costner may not get everything right but damn if he doesn’t try and his films deserve a lot more respect than they get.

I call Waterworld a Costner film because, let’s face it, he put his own money in, he helped with casting, he pretty much directed the project when Kevin Reynolds decided he couldn’t, and he is the one that faced the studio and the rabid critics. Waterworld is as much a Costner film as any of the projects his name is credited for in the director’s slot. Yes, mistakes were made. The weather in that part of Hawaii maybe needed to be researched a little better so it wouldn’t have destroyed so much of the set and led to many more days of shooting than they wanted. Yes, it was an audacious attempt to make an old school epic and perhaps needed a little better planning. And yes, it went over budget, but when you listen to Costner and some ex-studio executives all these years later it wasn’t. The budget was publicly announced as $99million, because no studio wanted to be the first to announce over $100million in advance (T2 came in at $120million but was overbudget), and Costner knew, the studio knew it was a $125million film to make. Given the 10% margin of error means the total could have been $137.5million, I think making it for around $133million is good business. But take away the unfair and often unfounded media coverage, and do away with talk of a bloated budget, you are left with the important question that all films must answer; Is it any good?

Yes, yes, it is. Waterworld is far from being a perfect film but its scope of ambition is nearly matched by its delivery. It really is Lawrence of Arabia or Spartacus in its ginormous attempt to be both visual and grand in its design and a couple of tweaks in the casting, and maybe some slightly better special effects use in the underwater exploration scene, and it may well have become one of the greatest films of all time. However, there it sits amongst other fantasy adventure films instead of standing out, and is now part of a massive crowd of films, often getting missed when you search for something different to watch. It should be revered and spoken of in hushed whispers designed to keep the gem of a secret to yourself, but instead it needs fans like me to write about it, hoping it garners a wider audience at last.

Story-wise it's very interesting, and perhaps more apt in today's environment than that of the mid-90’s. The whole global warming fiasco is not just mentioned in passing, given lip service like some films, it is in the title, it is in the sea that makes up so much of the film, it is in the survivors just wanting a life on our planet they can survive through, in their hope for a utopia of fresh water and plants to feed from. It is in the evil Smokers and they thirst for oil, for gases, for fumes. It is in the use of Exxon Valdez as the Smokers base. It’s the film you would want made today but, because of how it was treated by the wider media twenty odd years ago, you just won’t get a studio to sign off on. The story plays out with its important message alongside visuals that mixes Mad Max with a Terry Gilliam movie, a style that was always going to appeal to my tastes, and the sets are magnificent with their dystopian feel. 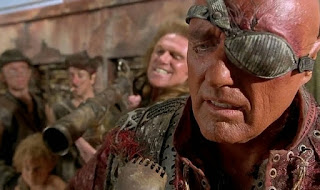 I mentioned the casting tweaks above, but they aren’t in the three main characters. I think Tina Majorino as Enola was highly watchable, mischievous and mysterious, and possibly one the less annoying children in a film for a long time. For a child so young to leave such an impression speaks volumes for her performance. Jeanne Tripplehorn as Helen was also good, playing the child’s protector, as the dreamer who believes in Dryland like a religious person would tightly hold onto their chosen God. Costner himself seems to thrive in roles where he is the loner and, in Waterworld, he is just brilliant. The fear and anxiety he portrays when his life changes, discovering Helen and Enola, when he sets foot on Dryland, are fantastically shown in his actions and his facial expressions, and as an action star in a fantastical adventure he is very convincing. I have always enjoyed seeing Costner in films, never an actor to box himself into one type of role, and even films he’s in that are maybe not the best he is good, and I truly admire his bravery in his choices. Waterworld is one such choice.

When it comes to ancillary roles two shining lights were William Preston as Depth Gauge, who was hilarious to look at and how he welcomed death when it came made me smile for him, and Kim Coates as Drifter whose manic style and freaky voice surely demanded a spin off movie? My issue with casting, and it is only slight is with the two villains of the piece. Gerald Murphy as Nord, the tracker and trader that first discovers Enola has a map with directions to Dryland on her back seems to growl a lot and has fierce eyes, but I don’t buy any menace in him, not enough evil madness to be who the character demands he must be. I mean he’s okay in the role but okay does not epic make, and I think whilst I love Dennis Hopper in everything, as Deacon the character demanded somebody with even more gravitas than Hopper has, maybe a Jack Nicholson or someone similar.

Small tweaks in those essential bad guy roles and Waterworld becomes a behemoth of a movie, the epic I really wanted it to be. As it is though it is still a fantastic piece of escapism, an important message dressed in wonderful fantastical storytelling, and demanding of a new audience.