Doctor Who - A Christmas Carol 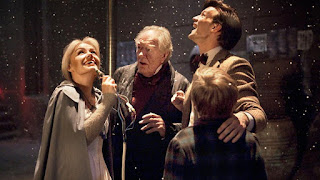 For December, and since this year's Special isn't until New Year's Day, a reminder of our Doctor Who expert Tony Cross' thoughts on ten New Who Christmas Special episodes from the past. Here is the Eleventh Doctor adventure A Christmas Carol ....

I think A Christmas Carol is my favourite Doctor Who Christmas Special so far. Obviously, it's a Doctor Whoified version of Dicken's original story but deliberately so. The Doctor needs to save 4,003 people and the best way of doing that is to go all 'Ghost of Christmas Past' on Kazran Sardick (Michael Gambon). I think you'd call it meta if you were that way inclined. Fortunately, I'm not.

Like most Doctor Who Christmas specials it has that extra layer of fromage, which I normally find a little too much for my slightly bitter and twisted palette, but this time doesn't irritate the hell out of me. Like it often does.

Yes, there's a certain amount of silliness - the shark-rickshaw fly by I'm looking at you - but it is a very specific kind of Doctor Who silliness. After all, in what other programme would you see Katherine Jenkins singing 'In the Bleak Midwinter' to a shark. None. Not one. I've said before I have a high tolerance for silliness in Doctor Who - after all I adore The Happiness Patrol - if it fits the vibe of the story and this does even if the shark-rickshaw skirts very close to the edge and stumbles over to stupidity. I suspect it is the sort of thing people with lower tolerance levels than I would disapprove of.

As might Katherine Jenkins be. She plays Abigail and I'm not going to pretend her performance sets the world alight, but she does what she needs to do. I'm aware that there are people out there that don't like Katherine Jenkins, mainly because her looks are deemed to have got her work her voice doesn't deserve. (Honestly, if you want to see this look at opera/classical 'fans' talking about her.) I'm not enough of an expert to tell you but I do know that she does a good enough job with Abigail. After all she's the angel that really saves - and almost condemns - Sardick. I expect calling her Angela instead of Abigail might have been too much of a giveaway. It's not the Doctor that saves Sardick really. It's Abigail. Even if their story must end on a bittersweet note.

The best thing about this episode though is Michael Gambon's performance as Sardick. It says a lot about the new Doctor Who that an actor with the stature of Gambon is happy to take a part - an impressive and large part I admit - in it. (Actually, and Katherine Jenkins to be fair.) Not is Gambon just a brilliant actor but his interactions with the Matt Smith are rather lovely. In fact, all three Sardick's do a fine job with Matt Smith so kudos to the casting director.

There are three actors playing Sardick. Laurence Belcher, who is Young Kazran, and for a teenage child actor both surprisingly good and not very irritating. Then there's Danny Horn, as Adult Kazran, he gets probably the least to do but gets to snog Katherine Jenkins a lot. He also does a fine job of conveying the change in Kazran when he realises what Abigail's situation is and that when he freezes her back in the cryo-chamber thing, he's also freezing his own heart. The Doctor's reaction to all of this is also rather well-played by Matt Smith: a combination of concern for Kazran and hurt at his - apparent - dismissal.

Kazran's an interesting Doctor Who villain because he's not without hope of redemption. From the moment, early in the episode, when the Doctor watches as he doesn't slap a small child, there's a possibility that there's more to Kazran than his grumpiness might indicate. Indeed, you get the impression that this moment, coming as it does shortly after the Doctor has laid down the threat on Kazran changes the Doctor's whole approach. That and the nudge from Amy.

Amy and Rory don't get much to do in this episode except to be both the people the Doctor is trying to save and to be a running joke about their costumes and why they are wearing them. Ah, the benefits of introducing sex into Doctor Who. So many smutty jokes, so little time.

Anyway you know the rules by now. Eventually the Doctor saves the day. People sing. The shark flies and off we go. Leaving behind another world and an unfinished story. You wonder what happens to Kazran after everyone has gone. How will he cope? Who knows? Who cares? We're off on another set of adventures. If we dwell on all this stuff the whole thing will unravel. I'm still trying to work out why the Doctor left Chloris in the hands of the man who was the chief thug and plant wrangler of the main villain. Does he not think these things through?

In fact The Moff's Doctor is much less hung up on this interfering nonsense. Now if he needs to save Rory and Amy's lives, he'll interfere with another man's timeline to his heart’s content. Jumping in and out of timelines.

AND WHAT'S HAPPENED TO THE BLINOVITCH LIMITATION EFFECT?? (Sorry, I came over all grumpy Doctor Who fan there. I really do need to get out more.)

Anyway I really enjoyed this singing, Sardick, shark and all.