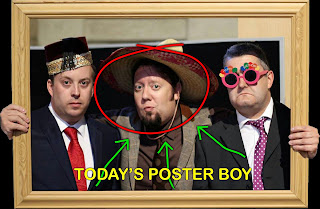 In the run-up to Christmas, our own version of The Three Wise Men reveal five of the classic film posters that have adorned their bedroom walls down the years. Today's Poster Boy is Barnaby Eaton-Jones... 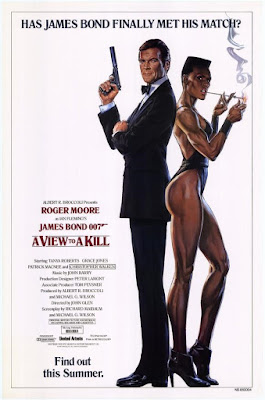 A VIEW TO A KILL

Ahhhhh, the iconic back-to-back pose of 007 and his nemesis. Apparently, Sir Rog and Her Grace didn’t get on at all, so the tension in this artistic stand-off is probably for real.

I was of an impressionable age when ‘A View To A Kill’ hit the publicity trail and, rather than the other poster showing 007 in classic gun-wielding pose atop San Fransisco’s Golden Gate bridge with an ex-Charlie’s Angel clinging on for dear life behind, it’s this more sparse poster that adorned my bedroom wall briefly.

Not only was ‘A View To A Kill’ the first James Bond film I saw at the cinema, but also Grace Jones made me feel both scared and delighted at the same time – so powerful was her presence. She may not be the world’s greatest actress but, by gum, did her persona leap out of the screen at you. As striking to look at as the strike you’d get from her for doing so. It really did appear as James Bond had met his match in the field and in the bedroom. Poor Sir Rog looking decidedly troubled in every scene he’s in with her.

There was also, in my youth, a short-lived, pig-based comic called ‘Oink!’ – which was like ‘Viz’ for disturbed kids. One of the things that seemingly inspired me for a few short months was their re-drawing of famous movie posters using terrible porcine puns and changing the movie stars appearance to that of an upturned snouted hog. I still have about 5 drawings I did in this style, the first being ‘A View To A Swill’, starring James Pork. Or some such. It’s very surreal and I’m not sure whether it’s genuinely that which keeps this poster alive in my mind now I’ve long since left my bedroom behind or whether it’s the poker-faced stare of Grace Jones herself. 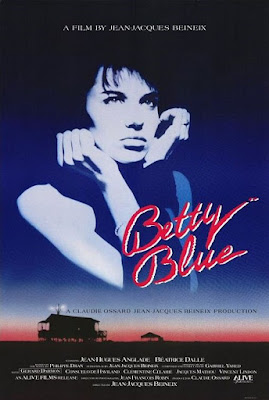 I caught this film on BBC 2, I think, after I’d bought the poster and had it up on my wall because I fell in love with it. Well, fell in love with her. Well, it and her. The bluey blueness of the image haunted me, alongside her far-off stare. I had no idea what it was about or whether I could read the subtitles fast enough to understand it. But, when it premiered on terrestrial television I was instantly embarrassed by the sheer – and what I thought at the time was surely pornographic – passion of the opening scene where the two lovers go at it in the most naturalistic and intimate and realistically erotic way. I wasn’t sure I could cope with the rest of the film after that.

And you do have to cope with it.

It’s a story of broken love and a broken psyche. It’s both light and dark in equal measures, as traumatic and troubled as the lead character is. It gets bleaker as it goes on.

It couldn’t be any more French and arthouse if it tried and I was both hooked and disturbed by its rawness in equal measures. It led me down a cinematic path of Frenchness that I haven’t reached the end of yet. There’s something languid and freeform about French cinema, with a realism that sucks you in. After I’d watched the film, I took the poster down. I wish I could say it was because I felt her pain and her suicidal tendencies affected me (which they did), but I’d hazard a guess that I was worried my parents might have watched the movie too and knew how decidedly raunchy it was. This was the closest I got to having a ‘male fantasy’ type of a poster on my wall and, initially, it was purely accidental! 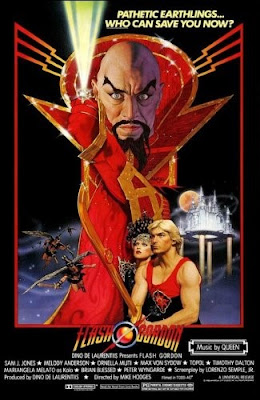 As I delve back through my addled memory banks, I do recall often having posters before the films came out.

There was a shop right next to the cinema that I regularly frequented, which sold giant posters (and also postcards) of movie posters and movie stills. It drew me in and I’d often discover a film by its poster and publicity still first before trying to find it to rent on VHS, or see at the cinema.

More often than not, a giant poster would come with a magazine and you’d have the inevitable lines of unfolded creases in a pattern of squares, as if sectioning off parts of the poster.

‘Flash Gordon’ was the most stunning of posters, even before I’d had the chance to witness the visual feast of a film it was too.

This slice of cinematic kitsch was a masterpiece of overblown spectacle. It’s so cheesy that I toast it regularly and consume it until I over-indulge. The poster had the brilliant idea of using that ‘80s artistic montage with a proper feel of the old Saturday Matinee Serials that this once was. Max Von Sydow’s eyes, as Ming, properly bore through you and how the heck is that ice fortress flying and… wait… are those birds or men with wings? And why is it reminding me of ‘Barbarella’? 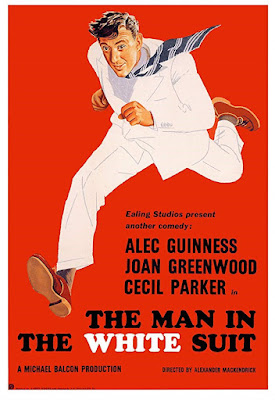 THE MAN IN THE WHITE SUIT

This is my least favourite Ealing comedy. If you don’t know what an Ealing comedy is, run away and begin your education now but don’t begin it with this one.

So, why did I have this poster of it? Well, look at it. It’s a thing of simplistic beauty.

It probably subconsciously helped that my father looked a lot like Sir Alec Guinness and, as I always viewed my father as somewhat of a hero figure, then there could be that reasoning that lead me to popping this up on a wall for a while.

I recall gorging on Ealing comedies after seeing ‘The Ladykillers’ for the first time. I couldn’t get enough of the so-called classics from that so-called brand. However, I have to say I was completely underwhelmed by this film.

Watching it with older eyes I can see that this is the most overtly satirical of the films, with a proper mirror message of how society works. The suit represents change and progress and the fear of it brings out a mob mentality and a ruthless streak in those that want it for themselves. But, as I say, the sheer boldness of the decision caught my eye and I loved the energy and exuberance in the painting. It didn’t stay up on my wall for long but it did burn itself into my retinas, as blindingly as the suit did in the film itself. 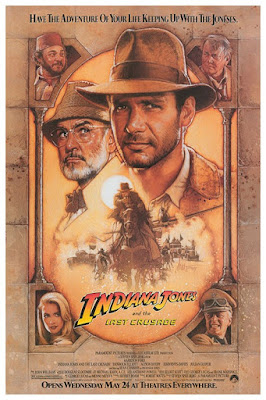 INDIANA JONES AND THE LAST CRUSADE

Harrison Ford was my idol when I was young. I even tried to walk bandy-legged like he did. You always look up to certain film or television stars when you’re younger, which shapes your thinking and personality.

Running a close second was Sir Sean Connery. And this iconic pairing, even though Connery isn’t technically old enough to be Indy’s father, is absolutely fizzing with chemistry.

But, look at this beautiful poster. It was painted by the legendary Drew Struzan in his inimitable and much-copied style. The palette of colours is perfect, the composition, the placing of the characters, the action scene, the focal point, the text, everything. It’s a perfect poster, in every way.

This clung pinned to my wall longer than any other poster (aside from a couple of my drawings I had framed – there’s nothing like thinking you can compare to the art around you!).

There were many other posters and pictures that came and went on those four bedroom walls of mine from my family home. Tastes change. Some were flavour of the month, some have stuck with me to the middle-aged nostalgic that I am today.

This had pride of place.

‘Indiana Jones and the Last Crusade’. It turned out it wasn’t his last crusade but it’s clear that it should have been. A perfect end to a near-perfect trilogy.

Today, I have my own office to work from in my house and I look around at the bare walls and I wonder how far I can regress in order to pop up some retro posters. It’s about time I got the drawing pins and blue-tac out again.