The Defective Inspector goes full John Wick in a tiara as he plays Battle Princess Madelyn, developed and created by Causal Bit Games...

Bravery is making a game like a classic but giving it a fresh coat of paint. Bravery is not giving me the double jump until after I kill a giant spider. And finally, bravery is allowing me to play the game and write a review about it. Luckily Battle Princess Madelyn is more than brave enough to deal with big ol’ nasty me. None the less I shall bare my teeth and growl my critical thoughts. 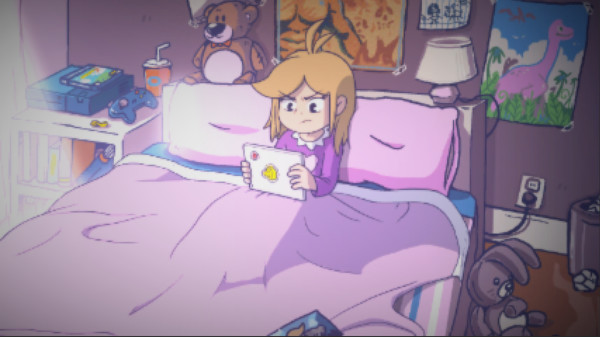 The game is unashamedly an updated version of Ghouls ‘n Ghosts, an old school arcade title, but the most obvious difference is the sudden gender change. Gone are the days of Arthur as the daughter of the creative director wanted to be injected into the title, sadly she didn’t believe girls could be knights and THAT got the game going. Christopher Obritsch threw the patriarchal book aside and appeased his beloved daughter’s desire to be whatever she wanted, including a fictional knight who hunts after a villain called Green head. I did say ANYTHING.

So how goes the game feel? It feels like Ghosts ‘n Ghouls but with a bit of Metroidvania thrown in there. Yes, you are side scrolling with the same ridiculous run animation we love and remember but there is more to it than that. You need to unlock regions, find secret doors, gain new abilities, upgrade your weapons and quite frankly expand your whole world beyond G ‘n G. There is also this odd doll collection achievement system designed to increase the total playtime and appease the completionists in the gaming world. Not me obviously, but they number in the millions! 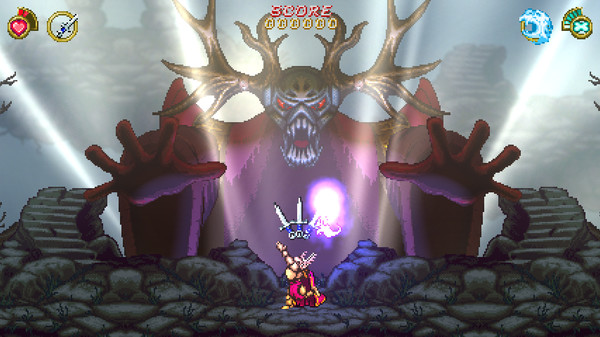 The plot is… Pretty loose. It is a classic tale of good vs evil and the evil in this case is a large angry wizard… I think. I never really picked up on what precisely this meant but there was a great driving force to keep me going, they killed my dog. Look I am a pretty chilled guy but when someone strikes down my pooch I go full John Wick. YES you do get the dog back as some sort of ethereal companion but gosh darn it, they killed my puppy! His name is Fritzy! HE IS/WAS ADORABLE. It’s even more heart shattering when the game loads I am pretty sure there was a real Fritzy and he is dead. Too many feels, begone onion ninja I have things to write!

One of the things I loved the most about this game were the bosses. There is a total of 10 levels, each with 5 stages, so there are plenty of bosses throughout the scenery. Each one is a little different and the way you deal with them is not entirely clear. In a less difficult Dark Soul fashion you are encouraged to watch the boss and learn when to take your shot. Some bosses are easier than others, that’s a given, but in the story mode you are able to die repeatedly and try again. You have to DECIDE to play Arcade mode for extra punishment, adding a little more of a thrill should you so desire. 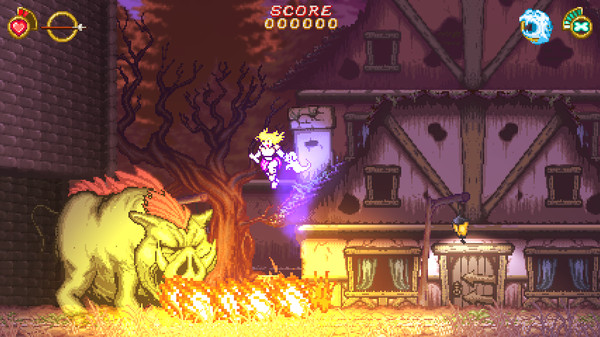 Another thing I loved? The aesthetics, both visual and audio. The true retro style pixel art brought an ancient tear to my aged heart, the seemingly hand drawn cinematics added a wholesome beauty to the title and the sharp and bouncy music throughout each stage compliment everything perfectly. It may seem simple, but that’s the whole point! A retro game needs to look simple but somehow utilize the more advance sound systems and 8-bit graphics. It’s a bit of a paradox so when it is done well, I am always impressed. That fine line was walked beautiful and I tip my hat to the artists involved.

Anything I didn’t like? Well I’ve yet to find a perfect game and this is no exception. I had difficulty at times navigating where I should go on a map. You see the game does provide literal sign posting to I can complete the level, but if you are missing a vital skill then those signs become a red herring. I was getting frustrated enough to turn the game off during the forest biome level because I KNEW double jump existed in the game but I couldn’t find where to get it. Once I finally did it was the end of my Twitch Stream time so I was excited and relieved at the same time. Personally, I’d just rather a physical barrier stops me, makes it clear I have unfinished business in “region x” and let me hunt for the boss in the right place. Though I will admit… I was very excited to find that double jump! 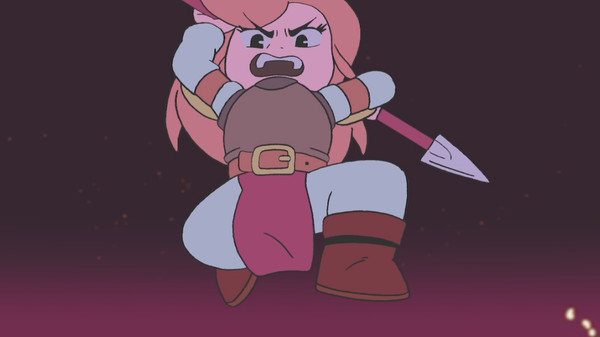 It may take you a while to double jump but Princess Battle Madelyn will reward your patience with wholesome animation, challenging bosses, inspired music and addictive gameplay. Not to mention the revenge rager I continue to have because of my dead dog, I WILL COME FOR YOU WIZARD MAN!