Doctor Who - The Husbands of River Song 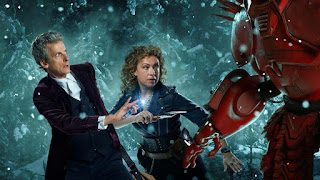 For December, and since this year's Special isn't until New Year's Day, a reminder of our Doctor Who expert Tony Cross' thoughts on ten New Who Christmas Special episodes from the past. Here is the Twelfth Doctor adventure The Husbands of River Song…

When I watched this story on original broadcast, I adored it. It went straight into the top spot as my favourite Doctor Who story ever. I knew this was probably temporary because it was precisely the story I needed after what had been quite a dark preceding season of Doctor Who, but I loved it.

Now, on the first re-watch after some time I still love it. It manages to balance fun, silly, moving and excitement rather well. It’s paced beautifully. Douglas Mackinnon’s direction is top-notch.

And it is, I think, the perfect end to the story of the Doctor and River Song. Bringing her back now would, like the repeated returns of Rose, be a disappointment. Whether by accident or design Steven Moffat has managed to tell a pretty perfect time-travelling love story. We should be generous and assume it was by design.

I have liked River Song. I think Alex Kingston has played her to perfection. It will be a shame not to see her again, but don’t spoil this perfect end by bringing her back dear future showrunners. Everything has its end. Although – one tiny quibble – I think she’s uncharacteristically obtuse in not realising that this is the Doctor before she does. However, I forgive that because it gives us the best ‘Hello Sweetie’ in the whole series (and I love River’s attempts to win back some credibility in its aftermath.)

Capaldi is excellent in this too. He gets two of my favourite Capaldi moments in this story: his entrance into the TARDIS – ‘finally’ and his speech at the end to River when he’s ostensibly talking about the Singing Towers but is, in reality, talking about something entirely different. This is the first Capaldi story I’ve watched for a while and it reminded me once again why I’ve put him at the top of my list of favourite Doctors, which is – in its way – as arbitrary as my list of favourite Doctor Who stories. He can do it all. I think the key to playing the Doctor is the ability to shift from serious to silly in a moment and Capaldi can do that.

The supporting cast, of whom there are not a lot, do a fine job in small-ish parts. Greg Davies gets to be loud and obnoxious, Matt Lucas gets to be funny, silly and a little strange as Nardole and Philip Rhys gets to be handsome as Ramone. None of them are particularly stretched but all of them do what they are asked to do with aplomb.

I should also add some praise for Rowan Polonski as Fleming, the maître d’ of the Starship Harmony and Redemption who channels the obsequiousness delightfully and then manages to turn into a total git. River Song gets to give him a lovely verbal execution towards the end of the story.

The idea of the Starship Harmony and Redemption, which I overlooked on the first watch, is a horrible and interesting one. It’s basically a place where genocidal maniacs go to relax. Even the crew, according to River, are murderers. I’m not sure it would be the sort of place one would like to hang out for lunch, but the decision of River and the Doctor not to save the ship and, I assume, let most of the passengers die seems to fit this. Perhaps Steven Moffat needed this to make sure that the final moments of that episode allowed the Doctor and River their moment. Having them aboard a ship full of people worth rescuing might have made that a bit messy.

And there we have it. Still vastly enjoyable. I still cried a little. I still think they should have kissed at the end.

Christmas is over for another year. The Doctor and River are spending their long, long night on Darillium and we must move onwards and upwards. We meanwhile have a year to wait for the next episode of Doctor Who, The Return of Doctor Mysterio. Of course, this being the future you won’t have to wait that long for my article.