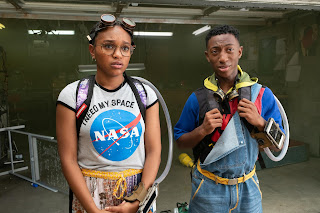 Spike Lee teams up with NYU alumni for the time travel drama See You Yesterday...

Based on the award-winning short film, the feature centres on two Brooklyn teenage science prodigies, Claudette “C.J.” Walker and Sebastian J. Thomas, who build make-shift time machines to save C.J.'s brother, Calvin, from being wrongfully killed by a police officer. The film is produced by Spike Lee and stars Eden-Duncan Smith (Roxanne Roxanne) and newcomer Danté Crichlow.

See You Yesterday is the directorial debut of Lee’s long-time NYU Graduate Film School protege, Stefon Bristol, who co-wrote the script with Fredrica Bailey while both were still graduate students at NYU’s Tisch School of the Arts. Bristol and Bailey landed success with the short film of the same name in 2017. The short won The Best HBO Short Film Award at Martha’s Vineyard-African American Film Festival and was a finalists at the HBO Short Film Competition at the prestigious American Black Film Festival.

“I started this project when Mike Brown and Eric Gardner were murdered. That was in 2014. And we are still dealing with deadly police misconduct. I made this film because I don't want the conversation on police brutality to slow down,” says Bristol. “I’ve never seen a film quite like this before—a sci-fi movie with brilliant Black teenagers. CJ and Sebastian represent a Brooklyn that we rarely get to see. CJ is a no-nonsense, brutally honest, aspiring astrophysicist. Sebastian is an over achieving, science prodigy whose main goal in life is to have over 200 patented inventions. I think the audience will relate to these charismatic characters. And we can both entertain and make you think.”

“See You Yesterday is genre-blending and entertaining” added Bailey. “But it also brings attention to the very real issue of police brutality. And it does it through the eyes of two young amazing black scientific geniuses—I’m excited to see such unique characters on screen.”

See You Yesterday was filmed in Brooklyn and The Bronx, New York and will be released globally by Netflix in 2019.

Photo by Linda Kallerüs for Netflix
Email ThisBlogThis!Share to TwitterShare to Facebook