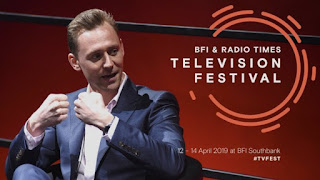 Over three days the BFI & Radio Times Television Festival will showcase some of the biggest hits on TV today, preview the most eagerly awaited new shows of 2019, celebrate classic series and perennial favourites and feature unique events that spotlight rarely-seen material from the BFI National Archive. Some of the biggest names in front of and behind the camera will join audiences to discuss their work on stage at BFI Southbank.

- Jed Mercurio, the man behind one of 2018’s most critically acclaimed programmes, Bodyguard, and creator of BBC One’s hit police corruption drama Line of Duty. Jed will be talking about the return of the hit series and introduce stars from the cast.

- Jamie Oliver celebrates 20 years since the programme that launched him, The Naked Chef, which changed the way we cook. Jamie will be talking about his life and career and whisking up a classic recipe in a live demonstration.

- For over 30 years murder has stalked Midsomer. Now the stars, past and present, of ITV’s Midsomer Murders reveal what it’s like to make one of the deadliest — and most popular — detective shows ever made.

- The festival will also be celebrating one the most loved British comedies of all time, Dad’s Army. Three episodes from the second series — The Loneliness of the Long Distance Walker, A Stripe for Frazer and Under Fire —were seemingly destroyed after they were first broadcast are now being remade; hear from the new cast about the making of the new shows.

The full line-up, with over 30 sessions over the weekend, will be announced in early 2019.

Co-programmed by the BFI and Radio Times, the festival will draw on the expertise of both organisations, to entice a broad range of audiences from telly addicts and boxset-bingeing aficionados to those who love to discover archive gems and people who love nothing more than coming together to watch the latest in prime-time entertainment. This year’s festival will also include a strand programmed for and by young people, to reflect their radically different TV viewing experiences.

The inaugural edition of the festival in 2017 welcomed star names including Tom Hiddleston, Claire Foy, Maggie Smith, Keeley Hawes, Charlie Brooker, Freida Pinto, Michael Palin and Thandie Newton, and was attended by more than ten thousand people over the course of the weekend.

The BFI and Radio Times is a partnership that underlines how both organisations have played an essential part in British television heritage for decades; the BFI is responsible for maintaining the BFI National Archive, home to one of the most significant archives of film and television in the world and is the UK’s designated National Television Archive. This includes the largest accessible archive of British TV programmes, an estimated 750,000 titles collected since the late 1950s. In addition the BFI curates television seasons and events at BFI Southbank, providing public access to that TV heritage.

The Radio Times is UK’s leading authority on television and radio and was the world's first broadcast listings magazine when it was founded in 1923 and is the UK’s best-selling quality magazine.