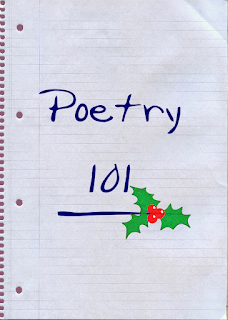 Susan Omand doesn’t celebrate Christmas but that doesn't stop her reminding you about her love of seasonal poetry...

Ahhh Christmas. The holiday season of goodwill, otherwise known as too much food, arguments over the rubbish on TV and probably the only time of year when people come closest to meeting a poem without realising it (scary, eh?).

The main festive poem that everybody recognises is the one that starts “Twas the night before Christmas and all through the house not a creature was stirring, not even a mouse”. Admittedly that’s probably ALL that people recognise of that poem. It's actually called A Visit From St Nicholas and was first published anonymously in an American newspaper in 1823, later attributed to the very reclusive Clement Clarke Moore who went on to write... well... nothing really and there’s even argument about whether or not he actually wrote this one. One of the first Christmas one hit wonders then. The poem however has gone on to spawn many versions and parodies, one of my favourites being the wonderfully geeky technical version from sources unknown which starts

'Twas the nocturnal segment of the diurnal period preceding the annual yuletide celebration, and throughout our place of residence, kinetic activity was not in evidence among possessors of this potential, including that species of domestic rodent knows as Mus musculus.

(read the rest here. Yes it’s a physics forum, what of it?)

A far more prolific poet is responsible for the other poem (really a story written in rhyming couplets but it counts!) that people associate with Christmas, mostly now thanks to an awful Jim Carrey film, and that is Dr Seuss and How The Grinch Stole Christmas. In the story The Grinch, who lives just north of Whoville, got so annoyed by the whole festive thing he started stealing Christmas items from the Whovillian’s houses to stop the day arriving. However, Christmas dawned anyway and the Whoville inhabitants celebrated even though The Grinch had all their presents and decorations because Christmas is about more than stuff, although you wouldn’t think it these days. Dr Seuss (which should really be pronounced to rhyme with voice apparently) was really Theodor Geisel, an American poet who wrote and illustrated more than 60 books in his lifetime, several of which have now been adapted into films or cartoons, even though the good doctor was against this in his lifetime. However, apart from The Cat in the Hat, the Grinch is probably one of his most abiding characters and one I definitely identify with... until it all goes happily ever after in the end.

So they’re the obvious Christmas poems, what about a sneaky one? For example, we all know the Christmas carol “In the Bleak Midwinter” but how many people realise that the words are from a poem written around 1872 by Christina Rossetti? Her poem was again originally published in a newspaper (see, you don’t have to read books to find poetry) and only became a Christmas Carol in 1911 after Gustav Holst (he of the Planets fame) set it to music. The same is true for many Christmas Carols, like the Twelve Days of Christmas, which was originally a French rhyme and first noted down in a book called Mirth without Mischief in 1780!

But I shall leave you with the first verse of one of my favourite festive poems and one that I feel really brings out the true message of the season...


Hippo Christmas one and all.