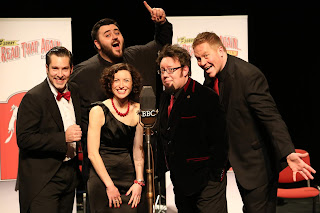 Following a successful and critically-acclaimed theatre tour in 2017 where The OFFSTAGE Theatre Group (a Gloucestershire-based touring company) tried to recapture that anarchic and freewheeling madness of a group of friends trying their best to make each other laugh as well as the audiences - and which featured cameos from Tim Brooke-Taylor, Graeme Garden, Jo Kendall and superfan Mitch Benn) – Spiteful Puppet Productions Ltd are delighted to announce that BBC Radio 4 Extra have picked up their executive produced radio version of ‘I’m Sorry I’ll Read That Again… Again!’ as a four-part series for broadcast.

I'm Sorry I'll Read That Again (ISIRTA) was a seminal BBC Radio classic comedy, spawning The Goodies and Monty Python's Flying Circus and, most importantly, the forerunner to I'm Sorry I Haven't A Clue. This show's mix of anarchic madness, silly puns, catchphrases galore and gloriously manic characters ran from 1964 to 1973 and had a youth following that made live recordings seem more like a rock concert than a comedy show.

Tim Brooke-Taylor, who also co-wrote and appeared in the original series, said "One of the best bits of my working life has been the cast recordings of ‘I’m Sorry I’ll Read That Again’. We, the cast, had huge fun, and so did the audience. Watching Barnaby Eaton-Jones and his talented team in this revival, having just as much fun (and the audience, even more so), brought back very happy memories indeed. Definitely not to be missed!”

This new version has been adapted, directed and produced for radio by Barnaby Eaton-Jones, from scripts and songs written by Graeme Garden and Bill Oddie. Barnaby has also added some additional material to the show, which includes an original sketch from the early radio series, by kind permission of none other than Eric Idle.

Barnaby said "To be bringing this 'Best Of' show to life on radio is a humbling experience, having been a fan since I was a youngster. My life’s ambition was to perform comedy on BBC Radio, which has been made somewhat difficult by a debilitating long-term illness. To be able to achieve this means I’m forever grateful to Graeme Garden and Bill Oddie for allowing me to play in their sandbox and fulfil my dream. It’s a delight to allow the audience to be introduced, or re-introduced, to such crazy creations as Lady Constance de Coverlet and Professor Prune and his Electric Time Trousers (to name but two). We’re stepping into some very big comedy shoes and I hope you enjoy our clowning around with this classic material. No gibbons were harmed in the making of this programme. They were stuffed instead.”

Here's a taster of what you can expect: