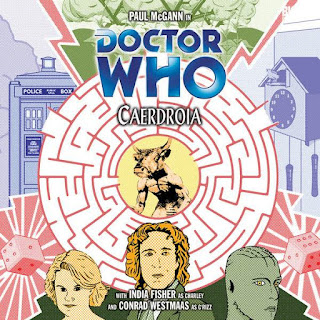 Our Doctor Who audio expert, Tony Cross, delves into the back catalogue available from the Big Finish website. Today is the Eighth Doctor and Charley adventure Caerdroia...


That was fun and by the end The Doctor is The Doctor again. Or so it seems.

The Doctor's been getting used to his new universe and finally seems to have got himself back together enough to trick the Kro'ka into coughing up some of his secrets and he's on the trail of his long missing TARDIS.

Part One basically takes place inside the Interzone and when the Doctor pops through into the next place where he feels the TARDIS might be it turns out that there are three of him. A multi-Doctor story with a difference. The same Doctor, but with three avatars. There's a day-dreamy excitable one (that Charley nicknames Tigger), a brusque and unpleasant one (Eeyore) and a relatively normal one.

Part Two seems the Three Doctors split up and explore their surroundings, which appear rather strange. Eeyore goes with Charley and find themselves climbing about in the interior of a cuckoo-clock with no hands; Tigger and K'rizz go for a walk in the park and encounter some bizarre beasties, one of which is from K'rizz's home world and rather unpleasant; normal Doctor goes to find someone in authority but finds himself dealing with a Kafkaesque bureaucracy (slightly reminiscent of Mr. Popplewick in the final episodes of Trial of a Time Lord). All three want to leave, all three go through separate doors and find themselves back together. In the same place. A labyrinth completes with roaring monster. (Actually, one of Doctor Who's less impressive cliff-hangers that but interesting).

Part Three finds everyone escaping the monster - which is a Minotaur (or THE Minotaur) - and aided by a man called Wayland. Wayland tells a tale explaining the Minotaur and convinces the Doctor(s) to help him break in to the central chamber of the labyrinth, which is protected by a mathematical lock. Tigger goes off with K'rizz and Charley to explore the park, the remaining two Doctors realise that someone is trying to get them to break in to their own TARDIS. It's Kro'ka. Refusing to help him doesn't put the Kro'ka off his stride much. He has captured Tigger Doctor, who he feels is the weak link. The easiest Doctor to break.

Except he might not be. Masterful at talking piffle this Doctor realises that Kro'ka's been rather devious and that - should his masters find out - there will be trouble for the Kro'ka. Trouble with a capital T. Trouble involving unpleasantness of a possibly fatal kind. For the Kro'ka.

However, as Part Four unravels the Doctor(s) get on top of the situation, despite a near run thing with a brain drain and some rather loud bells. Kro'ka gets tortured by the Eeyore Doctor (who must have similarities with the Valeyard) and coughs up a few secrets. This scene is McGann at his best. He is rather terrifying as the darker Doctor, especially when he reminds The Kro'ka that the other two Doctors normally keep him under control.

K'rizz and Charley trying to locate the Doctor(s) find themselves exploring Caerdroia's streets and corridors, which are very Castrovalva. (There are certain similarities between the two stories including their titles but that might just be me putting two and two together to make two thousand, six hundred and fourteen).

Eventually everyone gets together, and we find ourselves back inside the TARDIS. The Three Doctors become one and everyone is happy. But the enemy has fled, which annoys the Doctor like hell. However at least he's now free to explore this new universe. There's no time here of course but all of space is his to explore. He's happy again.

The Kro'ka however is on the receiving end of a rather unpleasant exit interview with his employer.

I have left a few bits out of the above description, which is a bit of a change to the usual format. I don't wish to spoil things entirely.

It's good though and it ties together some of the Divergent Universe threads. My complaint about another mind invading alien is revealed for the arc plot point it is. They're trying to get inside the Doctor's mind because they want the secrets of the TARDIS. Bits and pieces are pulled together on Caerdroia but the whole is not exhibited.

McGann gets to show off as he does the Three Doctors stuff and it is nice to have a Doctor back who is a little less...bereft. This is the victorious, sharp-thinking, sharp-witted, waffling enthusiast of old.

India Fisher and Conrad Westmaas do some fine stuff too. Charley is funny and witty in this story and K'rizz develops a line in dry wit. He's also suitably flummoxed on his first entrance into the TARDIS, which is nice.

Oh and applause for Stephen Perring as The Kro'ka. Another serpentine voiced villain but with a good line in incompetence. It's as if G4S had been hired to provide a front-line villain service by those who employed him.

This is good. Well-worth a listen.