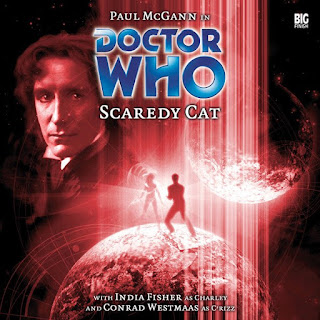 Our Doctor Who audio expert, Tony Cross, delves into the back catalogue available from the Big Finish website. Today is the Eighth Doctor and Charley adventure Scaredy Cat...


Scaredy Cat is a short, sharp Eighth Doctor adventure. A small cast on a little planet fighting not to save the Universe or the Galaxy but just to let one planet go on its merry little way. It's also a return to one of Doctor Who's great motifs: The Base Under Siege.

It's old school after the weighty and arc heavy stuff we've seen from the Eighth Doctor so far. In that sense it is refreshingly 'light' even if the subjects it covers might not be. It rattles along at a surprising pace but that might be as much to do with the short episode times. Three of them clock in at under 18 minutes and the fourth at a smidgen over 22 minutes. I'd complain about being short-changed but that would be petty.

The Doctor, Charley and C'rizz decide to visit Endarra, a supposedly unpopulated little planet. It's sister planet Caludaar has had a long ban on visiting it. So, the Doctor is bending a rule a little expecting to find no-one there, except there is.

Arken (Arthur Bostrom) is here conducting rather dodgy experiments, which he thinks can eliminate the 'evil' inside people's minds. Arken is not the first deluded scientist in Doctor Who history and you suspect from the off that this isn't going to end well for anyone. And then there's the secrets room. What or who is Arken keeping in there and why? No one - Bronik (Spencer Maclaren) or Niah (Rosalind Blessed) - wants to talk about it but there's clearer something nasty in the woodshed.

Then there's the planet's own little secret. A mysterious little girl whose taunting little chorus of 'Scaredy Cat' gives the story its title. Who - or what - is she?

All will be unravelled. The nasty thing in the woodshed will turn out to be Flood (Michael Chance) a rather unpleasant Caludaarian serial killer with a convincing line in charm and another of those slimetastic voices. Flood turns out to be trouble for everyone, but most particularly C'rizz.

There's a use of the TARDIS in 'Image of the Fendahl' stylee mid-adventure to help explain who the mysterious little girl is; there's unpleasantness around biological weaponry and a riff on the Gaia hypothesis. The Doctor also reveals that Time Lords are told to avoid mucking about on newly formed planets for a reason. It's a rule even he sticks to. This story explains why.

It isn't the greatest tale ever, but the combination of performance and pace make it rather enjoyable, if a little fluffy. But then after 'Terra Firma' with its continuity filled baggage and all that heavy stuff in the Divergent Universe that does make a rather nice change.

It's not one of Charley's best stories because poor old India Fisher gets side-lined into a more old style 'Penelope Pitstop' type companion in this rather than her usual feisty self but Conrad Westmaas gets some good stuff to get his C'rizz teeth into, especially in his confrontations with Flood in the final episode.

So enjoyable enough but not the best that Big Finish can do. 'Scaredy Cat' consider yourself damned with faint praise.