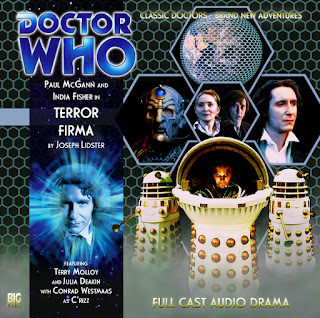 Our Doctor Who audio expert, Tony Cross, delves into the back catalogue available from the Big Finish website. Today is the Eighth Doctor and Charley adventure Terror Firma...


I'm back. And I'm more powerful than ever before!!! (Manic, evil laughter)

So are The Doctor, Charley and K'rizz. Back in 'our' universe and walking smack bang into The Daleks and Davros. Not the best of welcomes but this is The Doctor and if there's trouble to be found, the Doctor will find it.

This is excellent stuff. The dialogue sparkles, the scenes between Davros and the Doctor, which always seem quite playful at times but there’s an undercurrent of menace there . This Davros feels more like the Revelation's Davros with a broader emotional range and a sense of humour. There are one or two moments here where I found myself feeling sorry for Davros, which takes some doing. It doesn't last long but here is a three-dimensional Davros and much kudos to Terry Malloy for his performance, especially as Davros is a person with serious problems here. Malloy manages to portray Davros at his most giggling insane - and the laugh is horribly off-beam - and at his most piteous and tragic without making him seem just another villain. It's exceptional and it brings out the best in McGann too.

They're discussions range over issues and ideas. There's a nice moment where McGann's Doctor squishes the Fourth Doctor's well-known 'Genesis of the Daleks' philosophical concerns with the words: "Do I have the right yadiyadiyah". They're evenly matched and even as the full scope of Davros's plan emerges the Doctor manages to resist the temptations he is offered. Davros wants revenge and has gone to exceptional lengths to get it.

[What follows may be considered a SPOILER but as this has been out since August 2005, I think I can get away with it].

The saddest companion departure in Doctor Who - for me - has always been Jamie and Zoe's departure at the end of 'The War Games'. Doomed to forget their time with the Doctor they move on and Zoe's last line is heart-breaking. In 'Terra Firma' though we get something worse in Gemma's fate. Her time travelling with the Doctor wiped from his mind by Davros, turned into a Dalek agent and then...well...it's a bloody tragedy. So, it doesn't have the emotional impact of Jamie and Zoe's departure, but it does pack a punch of its own.

Yes, clever little Big Finish introduce two companions who travelled with the Eighth Doctor who we've never seen or heard of because Davros got to them and the Doctor, Gemma (Lizzie Hopley) and Samson (Lee Ingleby). There's also their Folkestone based partying mother, Harriet (Played with panache by the wonderful - if you like Spaced - Julia Deakin). Folkestone being the only bit of the Earth that the Daleks haven't got around to exterminating and converting for no obvious reason (but which does get explained nicely later). The survivors are partying away as if making the best of a bad lot.

It's a typically convoluted Doctor Who villain plan. One even the Daleks scoff at towards the end when they're getting a little uppity. Why not just kill him? The question that must be asked repeatedly. Davros's plan is a magnificently baroque attempt to not just get revenge on the Doctor but to break him. Completely. There’re so many different elements and so much time spent that it was bound to go wrong somewhere. Something a bit simpler next time. (It does have certain fellow feeling with The Stolen Earth-Journey's End if you ask me but once more perhaps, I'm putting 2 + 2 together to get 2212.)

The acting is top notch. I've already mentioned Malloy, McGann and Deakin but Lee Ingleby does sterling work as the confused and virtually broken Samson; Lizzie Hopley makes you like Gemma a lot in the short time you get to know her, which makes everything worse; India Fisher makes Charley sparkle as is her usual wont and Conrad Westmaas brings a darker side to K'rizz than expected.

I should also mark one of the great short but sharp lines in Big Finish so far: "And then America went...silent." It's like "All my pretty ones" in Macbeth. A short line that conveys so much. (How's that for a pretentious comparison then people of the interweb).

If nothing else though you should listen to this for a masterclass in Davros-Doctor dialogue.