Audio - Doctor Who: The Next Life 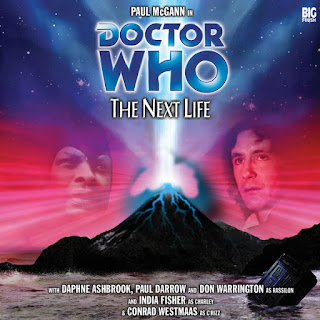 Our Doctor Who audio expert, Tony Cross, delves into the back catalogue available from the Big Finish website. Today is the Eighth Doctor and Charley adventure The Next Life...


Sometimes you just take an irrational dislike to a person you've never met. Something about their tone of voice when you overhear them talking, the way the block you in the street or just their general existence. That's how I feel about 'The Next Life'.

It might be that telescoping the whole Neverland to The Next Life story arc into ten days makes it unfair for me to judge this story as harshly as I do. I really, really disliked this. Really. To the point of wanting it to be finished as fast as possible. To the point of which listening to all six episodes felt like duty, not pleasure.

That isn't the fault of any of the actors involved all of whom do a sterling job. In fact, Paul Darrow's stint as Guidance is wonderfully underplayed (not something you often say when it comes to Paul Darrow in Doctor Who) and Daphne Ashbrook's Perfection isn't far off being perfection (I will stop here to acknowledge with a polite round of applause the excellent Grace joke in Part 2. Well done whoever came up with that). There's also a nice sinister turn from Stephane Cornicard as Keep.

The regulars all do good stuff too, even if Charley does have occasional Head Girl moments. Conrad Westmaas is asked to do a lot with K'rizz without being allowed (I assume) to go too over-emotional. And McGann, who is consistently brilliant, is brilliant. Especially right towards the end when he's giving K'rizz and Charley a telling off.

In fact, it is a compliment to Big Finish that one of the main reasons I hate this story is that I have grown to like Charley and K'rizz so much that another story which involves them being mentally tortured, convinced of the Doctor's untrustworthiness and betrayed by their memories and experiences seems like sadism on behalf of Big Finish.

Except by this point it is a Big Finish cliché. To the extent that Charley and K'rizz effectively say so.

It is too soon to jump into another story so depressingly epic. I am told that the Divergent Universe arc was rushed to an end in this story because the series was coming back to television, which may or may not be true. Whatever it is we've not had time to catch our breath from Caerdroia before wham, bam we're in a massive existential crisis trying to tie up all the loose ends.

It also has a dramatically silly way out for our heroes in the final part, which stretches credulity to breaking point. At least my credulity and when it comes to Doctor Who I'm pretty forgiving of plot holes and deus ex machina. But this one is a doozy.

So, we end up back in the normal universe and the final three minutes end up with a lovely little twist leading into the next adventure.

When I re-read what I've written above I realise that perhaps I am just being a little harsh but that doesn't stop me from not liking this story. Irrational it may be. Irrational it is. But no, this one is not for me.