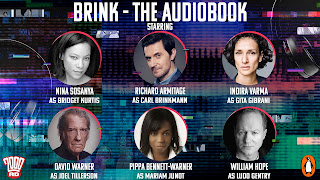 Richard Armitage, Sheila Atim, Colin Morgan and Joseph Fiennes are to star in new audiobook adaptations of legendary 2000 AD comics, including Judge Dredd and Halo Jones, due to be released next month...

The Handmaid’s Tale and Shakespeare in Love star Joseph Fiennes will star as the legendary future lawman Judge Dredd in the new series of audiobook adaptations from Penguin Random House and 2000 AD, while The Underground Railroad’s Sheila Atim will play the lead in the adaptation of The Ballad of Halo Jones, Alan Moore and Ian Gibson’s groundbreaking feminist space opera.
Merlin star Colin Morgan is tasked with giving voice to Slaine, while  The Hobbit’s Richard Armitage and His Dark Materials’ Nina Sosanya will star in Dan Abnett and INJ Culbard’s space-noir Brink.

Nina Sosanya said, “Brink is great sci-fi. It tells a scarily plausible story in an extraordinary, compelling way. Being involved in turning the graphic novels by Dan Abnett and INJ Culbard into a purely audio experience has been fascinating; hearing the story played out means that individual characters and situations become vivid in a whole new way. So Brink now exists on yet another plane, and in another dimension.”
Richard Armitage added, “It’s an incredible feat to be able to turn a visual medium like a comic into audio, and it was something I just had to be part of, especially after dipping into the comic book world in Captain America. 2000 AD has an incredible legacy in British comics, and it’s a thrill to bring these stories to life. Brink is such a wonderful space-noir drama, and I loved stepping into the shoes of Carl Brinkmann.”
These five new dramatic audio adaptions of the best-selling 2000 AD graphic novels are performed by an ensemble cast, and accompanied by an original score and immersive soundscapes. These action-packed audio recordings will take fans on an immersive listening experience like no other.

The themes of the novels remain as relevant today as when they were first printed. From the tyrannical law enforcement of Judge Dredd in America to the stunning feminist space opera of Halo Jones, these dystopian worlds draw unnerving parallels to the politics and society of the world we live in today.

Written by some of the biggest names in comics – including Alan Moore (Watchmen, V for Vendetta, League of Extraordinary Gentlemen), Dan Abnett (The Legion of Super-Heroes, Aquaman, Guardians of the Galaxy), Pat Mills (Marshal Law), Simon Bisley (Lobo) and John Wagner and Carlos Ezquerra, co-creators of Judge Dredd – the series of five new audiobook adaptations will include: 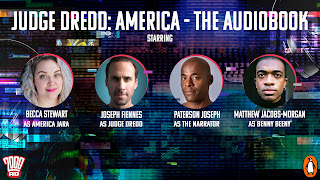 Judge Dredd: America featuring Joseph Fiennes (The Handmaid’s Tale, Shakespeare in Love), America is long considered one of the most important stories in British comics history; a story about freedom, terrorism, and armed struggle against an oppressive totalitarian police state. Wagner and Colin MacNeil’s groundbreaking story confirmed Judge Dredd‘s place as one of the most politically charged and nuanced series in comics. 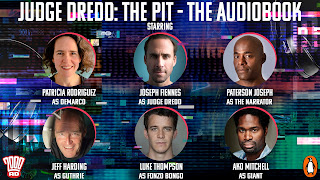 Judge Dredd: The Pit featuring Paterson Joseph (Neverwhere, Timeless), The Pit is an epic police procedural saga infused with action, politics, and corruption - The Wire meets Britain’s home-grown superhero Judge Dredd. Alongside a supporting cast of Judges, Dredd must clean up the dirtiest sector in Mega-City One. 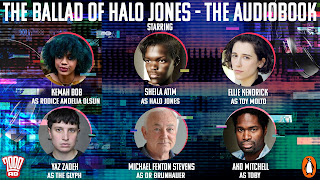 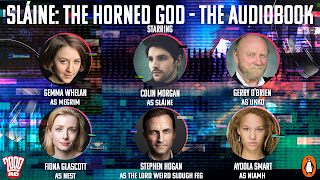 Sláine: The Horned God featuring Colin Morgan (Merlin, Humans), is an exhilarating mix of Celtic mythology, violence, and heroism, telling the story of the Horned God’s journey of death and rebirth, as Sláine leads his tribe in the service of the Earth goddess.

These adaptations in audio have been produced by the award-winning Penguin Random House Studios. Working closely with authors and editors at 2000 AD, all 300 characters in the graphics novels have been voiced by over 40 narrators, alongside mesmerising sound effects and original music.
All five audiobooks are released by Penguin Audio and Rebellion Publishing on 4th March.
Email ThisBlogThis!Share to TwitterShare to Facebook