Audio - Doctor Who: The Company of Friends 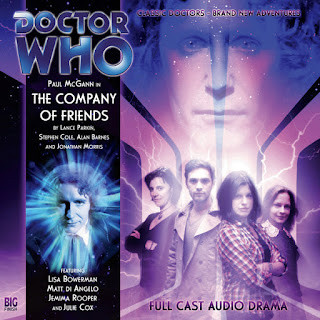 Our Doctor Who audio expert, Tony Cross, delves into the back catalogue available from the Big Finish website. Today is the Eighth Doctor adventure The Company of Friends...

The Company of Friends is a light-hearted little collection of one episode mini-adventures between the 8th Doctor and four companions. The usual thing is that the four companions are drawn from different media or in the case of Mary Shelley from throw away references in earlier Big Finish stories.

The first, Benny's Story, features Bernice Summerfield (Lisa Bowerman). This is I think the best of the stories. Benny is doing some archaeological work for Venhella (Su Douglas), which turns out to revolve around a TARDIS key dropped 50 million years before by...guess who? Yep. It's a jolly little story, which manages to combine adventure, conspiracy theories about TARDISes, digs at aristocrats with too much money and too little time plus a hint of Edge of Destructionness in how the TARDIS tries to defend itself. Good, tidy and rather fun.

Fitz's Story, features Matt di Angelo as Fitz Kreiner. Fitz- just in case you don't know (and I'd didn't as I'd stopped reading the BBC Eighth Doctor Adventures before he turned up) is a companion from the BBC Eighth Doctor range of novels. He's a bit different to the average Doctor Who companion being something of a wide-boy blokey bloke: a kind of Doctor Who Danny Dyer if you like. This one too is quite fun. Total fluff but fun.

Izzy's Story, features Jemima Roper as Izzy. Izzy was the 8th Doctor's companion in the DWM Comic strip. This is the silliest story of the four. And the worst. I think it’s because I quite liked Izzy in the Comic Strip. They gave her an excellent storyline and she seemed as real as any Doctor Who character gets - in any format - by the end. In this though they make her like an annoying kid, which she isn't. Or wasn't. I don't mind the silliness of the story - after all this whole collection is reasonably light-hearted in tone - but it’s the silliness of the character I object to. (The following sentence is dangerously pompous. I do apologies) I think it shows disrespect to the source material. (Sorry)

Mary's Story, introduces us to Mary Shelley (Julie Cox). I have a similar problem with this as I did with Izzy's story oddly enough and I regret to say that because it is based on taking this far, far too seriously. But taking Mary Shelley, Shelley, Lord Byron, Polidori and Claire Claremont together in the Villa Diodati is one thing. It's a situation that is calling out for the Doctor to walk into it but making the story basically the seed for Frankenstein somehow undermines Mary Shelley. And the portrait of the rest of the 'real' people involved is rather insulting. Shelley's a bit of a hero of mine (see Red Shelley by Paul Foot if you want to know why) and in this his brief appearances make him out to be...well a drug addicted fool really, which he wasn't. Byron's such a cliché he might as well be played by Rik Mayall in Lord Flashheart whilst Claire Claremont just simpers. Only Polidori gets a fair crack of the whip. So, whilst the story itself ain't bad I found it rather irritating.

I admit that in the case of Mary's Story I'm taking the whole thing far too seriously. It's half-an-hour so there isn't much time for subtle characterisation but taking some of the most interesting, radical and exciting figures of their time (Byron wasn't mad, bad and dangerous to know for nothing) and making them so...unexciting is a sin really.

So - if you don't take this too seriously - 'A Company of Friends' is a rather nice breathe of fresh air. A cleansing of the pallet after the departure of Charley and C'rizz. But for me it only partially works. Perhaps I should get out more.